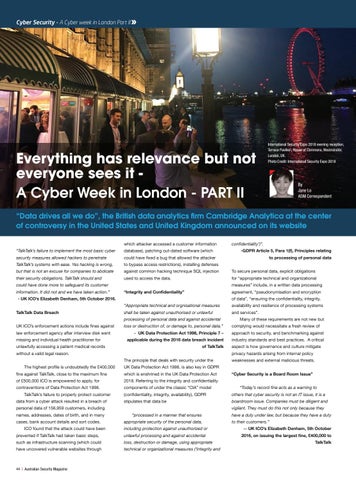 “Data drives all we do”, the British data analytics firm Cambridge Analytica at the center of controversy in the United States and United Kingdom announced on its website which attacker accessed a customer information

“TalkTalk’s failure to implement the most basic cyber

could have fixed a bug that allowed the attacker

but that is not an excuse for companies to abdicate

their security obligations. TalkTalk should and

for “appropriate technical and organizational

could have done more to safeguard its customer information. It did not and we have taken action.”

measures” include, in a written data processing “Integrity and Confidentiality”

availability and resilience of processing systems

shall be taken against unauthorised or unlawful

approach to security, and benchmarking against industry standards and best practices. A critical

without a valid legal reason.

which is enshrined in the UK Data Protection Act

2018. Referring to the integrity and confidentiality

components of under the classic “CIA” model

others that cyber security is not an IT issue, it is a

stipulates that data be

boardroom issue. Companies must be diligent and

personal data of 156,959 customers, including names, addresses, dates of birth, and in many

fine against TalkTalk, close to the maximum fine

data from a cyber attack resulted in a breach of

The principle that deals with security under the

applicable during the 2016 data breach incident

The highest profile is undoubtedly the £400,000

to processing of personal data

vigilant. They must do this not only because they “processed in a manner that ensures appropriate security of the personal data,

have a duty under law, but because they have a duty to their customers.”

including protection against unauthorized or

unlawful processing and against accidental

such as infrastructure scanning (which could

have uncovered vulnerable websites through

technical or organizational measures (‘Integrity and

ICO found that the attack could have been