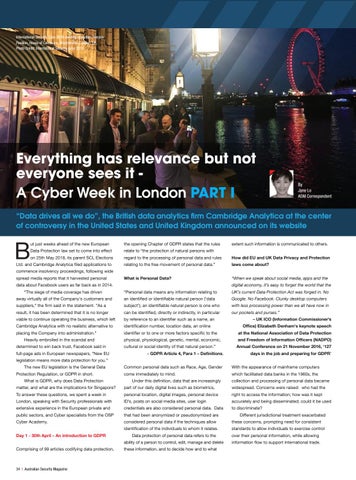 “Data drives all we do”, the British data analytics firm Cambridge Analytica at the center of controversy in the United States and United Kingdom announced on its website

ut just weeks ahead of the new European

the opening Chapter of GDPR states that the rules

relate to “the protection of natural persons with

regard to the processing of personal data and rules

How did EU and UK Data Privacy and Protection

relating to the free movement of personal data.”

What is Personal Data?

“When we speak about social media, apps and the

extent such information is communicated to others.

commence insolvency proceedings, following wide spread media reports that it harvested personal data about Facebook users as far back as in 2014.

digital economy, it’s easy to forget the world that the

“The siege of media coverage has driven

UK’s current Data Protection Act was forged in. No

away virtually all of the Company's customers and

suppliers," the firm said in the statement. "As a

subject’); an identifiable natural person is one who

with less processing power than we all have now in

result, it has been determined that it is no longer

can be identified, directly or indirectly, in particular

our pockets and purses.”

viable to continue operating the business, which left

by reference to an identifier such as a name, an

Cambridge Analytica with no realistic alternative to

placing the Company into administration."

identifier or to one or more factors specific to the

at the National Association of Data Protection

and Freedom of Information Officers (NADPO)

Heavily embroiled in the scandal and determined to win back trust, Facebook said in full-page ads in European newspapers, "New EU

With the appearance of mainframe computers

which facilitated data banks in the 1960s, the

Under this definition, data that are increasingly

matter, and what are the implications for Singapore?

part of our daily digital lives such as biometrics,

widespread. Concerns were raised: who had the

To answer these questions, we spent a week in

right to access the information; how was it kept

London, speaking with Security professionals with

accurately and being disseminated; could it be used

extensive experience in the European private and

public sectors, and Cyber specialists from the OSP

that had been anonymized or pseudonymized are

these concerns, prompting need for consistent

identification of the individuals to whom it relates.

Data protection of personal data refers to the

over their personal information, while allowing

ability of a person to control, edit, manage and delete

these information, and to decide how and to what