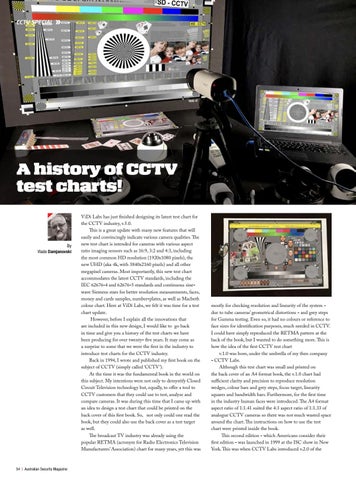 A history of CCTV test charts!

ViDi Labs has just finished designing its latest test chart for the CCTV industry, v.5.0. This is a great update with many new features that will easily and convincingly indicate various camera qualities. The new test chart is intended for cameras with various aspect ratio imaging sensors such as 16:9, 3:2 and 4:3, including the most common HD resolution (1920x1080 pixels), the new UHD (aka 4k, with 3840x2160 pixels) and all other megapixel cameras. Most importantly, this new test chart accommodates the latest CCTV standards, including the IEC 62676-4 and 62676-5 standards and continuous sinewave Siemens stars for better resolution measurements, faces, money and cards samples, number-plates, as well as Macbeth colour chart. Here at ViDi Labs, we felt it was time for a test chart update. However, before I explain all the innovations that are included in this new design, I would like to go back in time and give you a history of the test charts we have been producing for over twenty- five years. It may come as a surprise to some that we were the first in the industry to introduce test charts for the CCTV industry. Back in 1994, I wrote and published my first book on the subject of CCTV (simply called ‘CCTV’). At the time it was the fundamental book in the world on this subject. My intentions were not only to demystify Closed Circuit Television technology but, equally, to oﬀer a tool to CCTV customers that they could use to test, analyse and compare cameras. It was during this time that I came up with an idea to design a test chart that could be printed on the back cover of this first book. So, not only could one read the book, but they could also use the back cover as a test target as well. The broadcast TV industry was already using the popular RETMA (acronym for Radio Electronics Television Manufacturers’ Association) chart for many years, yet this was

mostly for checking resolution and linearity of the system due to tube cameras’ geometrical distortions - and grey steps for Gamma testing. Even so, it had no colours or reference to face sizes for identification purposes, much needed in CCTV. I could have simply reproduced the RETMA pattern at the back of the book, but I wanted to do something more. This is how the idea of the first CCTV test chart v.1.0 was born, under the umbrella of my then company - CCTV Labs. Although this test chart was small and printed on the back cover of an A4 format book, the v.1.0 chart had suﬃcient clarity and precision to reproduce resolution wedges, colour bars and grey steps, focus target, linearity squares and bandwidth bars. Furthermore, for the first time in the industry human faces were introduced. The A4 format aspect ratio of 1:1.41 suited the 4:3 aspect ratio of 1:1.33 of analogue CCTV cameras so there was not much wasted space around the chart. The instructions on how to use the test chart were printed inside the book. This second edition - which Americans consider their first edition - was launched in 1999 at the ISC show in New York. This was when CCTV Labs introduced v.2.0 of the

The Australian Security Magazine is the country’s leading government and corporate security magazine. It is distributed free of charge to ma...

The Australian Security Magazine is the country’s leading government and corporate security magazine. It is distributed free of charge to ma...