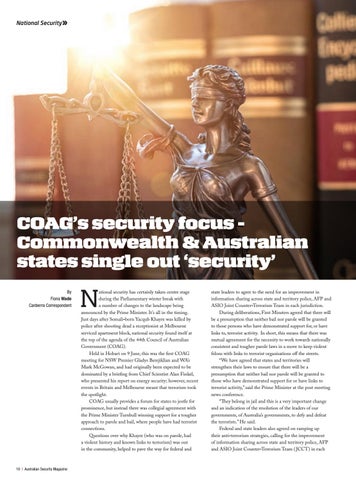 ational security has certainly taken centre stage during the Parliamentary winter break with a number of changes to the landscape being announced by the Prime Minister. It’s all in the timing. Just days after Somali-born Yacqub Khayre was killed by police after shooting dead a receptionist at Melbourne serviced apartment block, national security found itself at the top of the agenda of the 44th Council of Australian Government (COAG). Held in Hobart on 9 June, this was the first COAG meeting for NSW Premier Gladys Berejiklian and WA’s Mark McGowan, and had originally been expected to be dominated by a briefing from Chief Scientist Alan Finkel, who presented his report on energy security; however, recent events in Britain and Melbourne meant that terrorism took the spotlight. COAG usually provides a forum for states to jostle for prominence, but instead there was collegial agreement with the Prime Minister Turnbull winning support for a tougher approach to parole and bail, where people have had terrorist connections. Questions over why Khayre (who was on parole, had a violent history and known links to terrorism) was out in the community, helped to pave the way for federal and