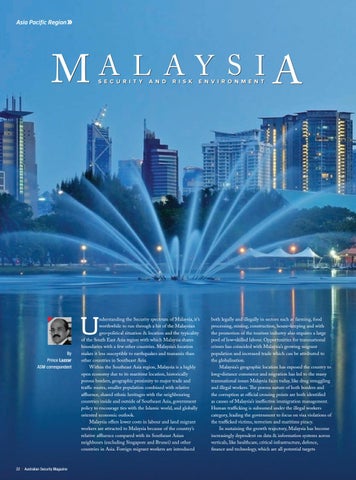 U By Prince Lazzar ASM correspondent

nderstanding the Security spectrum of Malaysia, it’s worthwhile to run through a bit of the Malaysian geo-political situation & location and the typicality of the South East Asia region with which Malaysia shares boundaries with a few other countries. Malaysia’s location makes it less susceptible to earthquakes and tsunamis than other countries in Southeast Asia. Within the Southeast Asia region, Malaysia is a highly open economy due to its maritime location, historically porous borders, geographic proximity to major trade and traffic routes, smaller population combined with relative affluence, shared ethnic heritages with the neighbouring countries inside and outside of Southeast Asia, government policy to encourage ties with the Islamic world, and globally oriented economic outlook. Malaysia offers lower costs in labour and land migrant workers are attracted to Malaysia because of the country’s relative affluence compared with its Southeast Asian neighbours (excluding Singapore and Brunei) and other countries in Asia. Foreign migrant workers are introduced

both legally and illegally in sectors such as farming, food processing, mining, construction, house-keeping and with the promotion of the tourism industry also requires a large pool of low-skilled labour. Opportunities for transnational crimes has coincided with Malaysia’s growing migrant population and increased trade which can be attributed to the globalisation. Malaysia’s geographic location has exposed the country to long-distance commerce and migration has led to the many transnational issues Malaysia faces today, like drug smuggling and illegal workers. The porous nature of both borders and the corruption at official crossing points are both identified as causes of Malaysia’s ineffective immigration management. Human trafficking is subsumed under the illegal workers category, leading the government to focus on visa violations of the trafficked victims, terrorism and maritime piracy. In sustaining the growth trajectory, Malaysia has become increasingly dependent on data & information systems across verticals, like healthcare, critical infrastructure, defence, finance and technology, which are all potential targets