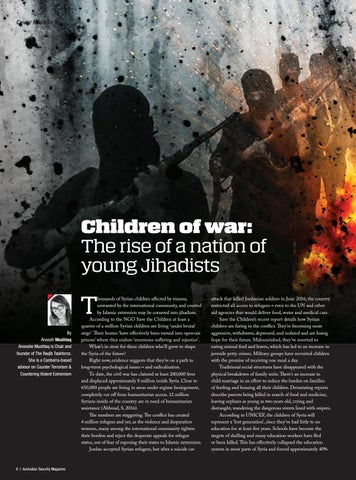 Children of war: The rise of a nation of young Jihadists

T By Anoosh Mushtaq Anooshe Mushtaq is Chair and founder of The Raqīb Taskforce. She is a Canberra-based advisor on Counter Terrorism & Countering Violent Extremism

housands of Syrian children affected by trauma, unwanted by the international community, and courted by Islamic extremists may be cornered into jihadism. According to the NGO Save the Children at least a quarter of a million Syrian children are living ‘under brutal siege’. Their homes ‘have effectively been turned into open-air prisons’ where they endure ‘enormous suffering and injustice’. What’s in store for these children who’ll grow to shape the Syria of the future? Right now, evidence suggests that they’re on a path to long-term psychological issues – and radicalisation. To date, the civil war has claimed at least 200,000 lives and displaced approximately 8 million inside Syria. Close to 650,000 people are living in areas under regime besiegement, completely cut off from humanitarian access. 12 million Syrians inside of the country are in need of humanitarian assistance (Abboud, S, 2016). The numbers are staggering. The conflict has created 4 million refugees and yet, as the violence and desperation worsens, many among the international community tighten their borders and reject the desperate appeals for refugee status, out of fear of exposing their states to Islamic extremism. Jordan accepted Syrian refugees, but after a suicide car

attack that killed Jordanian soldiers in June 2016, the country restricted all access to refugees – even to the UN and other aid agencies that would deliver food, water and medical care. Save the Children’s recent report details how Syrian children are faring in the conflict. They’re becoming more aggressive, withdrawn, depressed, and isolated and are losing hope for their future. Malnourished, they’ve resorted to eating animal feed and leaves, which has led to an increase in juvenile petty crimes. Military groups have recruited children with the promise of receiving one meal a day. Traditional social structures have disappeared with the physical breakdown of family units. There’s an increase in child marriage in an effort to reduce the burden on families of feeding and housing all their children. Devastating reports describe parents being killed in search of food and medicine, leaving orphans as young as two years old, crying and distraught, wandering the dangerous streets lined with snipers. According to UNICEF, the children of Syria will represent a ‘lost generation’, since they’ve had little to no education for at least five years. Schools have become the targets of shelling and many education workers have fled or been killed. This has effectively collapsed the education system in most parts of Syria and forced approximately 40%