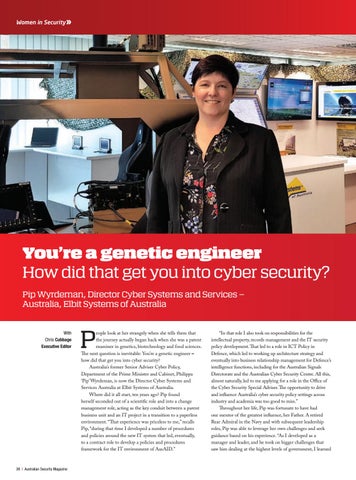 You’re a genetic engineer How did that get you into cyber security? Pip Wyrdeman, Director Cyber Systems and Services – Australia, Elbit Systems of Australia

eople look at her strangely when she tells them that the journey actually began back when she was a patent examiner in genetics, biotechnology and food sciences. The next question is inevitable: You’re a genetic engineer – how did that get you into cyber security? Australia’s former Senior Adviser Cyber Policy, Department of the Prime Minister and Cabinet, Philippa ‘Pip’ Wyrdeman, is now the Director Cyber Systems and Services Australia at Elbit Systems of Australia. Where did it all start, ten years ago? Pip found herself seconded out of a scientific role and into a change management role, acting as the key conduit between a parent business unit and an IT project in a transition to a paperless environment. “That experience was priceless to me,” recalls Pip, “during that time I developed a number of procedures and policies around the new IT system that led, eventually, to a contract role to develop a policies and procedures framework for the IT environment of AusAID.”

“In that role I also took on responsibilities for the intellectual property, records management and the IT security policy development. That led to a role in ICT Policy in Defence, which led to working up architecture strategy and eventually into business relationship management for Defence’s intelligence functions, including for the Australian Signals Directorate and the Australian Cyber Security Centre. All this, almost naturally, led to me applying for a role in the Office of the Cyber Security Special Adviser. The opportunity to drive and influence Australia’s cyber security policy settings across industry and academia was too good to miss.” Throughout her life, Pip was fortunate to have had one mentor of the greatest influence, her Father. A retired Rear Admiral in the Navy and with subsequent leadership roles, Pip was able to leverage her own challenges and seek guidance based on his experience. “As I developed as a manager and leader, and he took on bigger challenges that saw him dealing at the highest levels of government, I learned