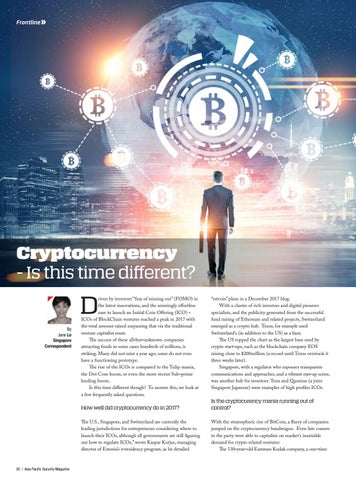 Cryptocurrency - Is this time different?

riven by investors’ “fear of missing out” (FOMO) in the latest innovations, and the seemingly effortless ease to launch an Initial Coin Offering (ICO) ICOs of BlockChain ventures reached a peak in 2017 with the total amount raised surpassing that via the traditional venture capitalist route. The success of these all-but-unknown companies attracting funds in some cases hundreds of millions, is striking. Many did not exist a year ago; some do not even have a functioning prototype. The rise of the ICOs is compared to the Tulip mania, the Dot Com boom, or even the more recent Sub-prime lending boom. Is this time different though? To answer this, we look at a few frequently asked questions.

“estcoin” plans in a December 2017 blog. With a cluster of rich investors and digital pioneers specialists, and the publicity generated from the successful fund raising of Ethereum and related projects, Switzerland emerged as a crypto hub. Tezos, for example used Switzerland‘s (in addition to the US) as a base. The US topped the chart as the largest base used by crypto start-ups, such as the blockchain company EOS raising close to $200million (a record until Tezos overtook it three weeks later). Singapore, wtih a regulator who espouses transparent communications and approaches, and a vibrant stat-up scene, was another hub for investors: Tenx and Quonine (a joint Singapore Japanese) were examples of high profiles ICOs.

How well did cryptocurrency do in 2017?

Is the cryptocurency mania running out of control?

The U.S., Singapore, and Switzerland are currently the leading jurisdictions for entrepreneurs considering where to launch their ICOs, although all governments are still figuring out how to regulate ICOs,” wrote Kaspar Korjus, managing director of Estonia’s e-residency program, as he detailed

With the stratospheric rise of BitCoin, a flurry of companies jumped on the cryptocurrency bandwagon. Even late comers to the party were able to capitalize on market’s insatiable demand for crypto related ventures: The 130-year-old Eastman Kodak company, a one-time

The Asia Pacific Security Magazine is published bi-monthly and features news, articles and promotes partner events from across the region, i...

The Asia Pacific Security Magazine is published bi-monthly and features news, articles and promotes partner events from across the region, i...