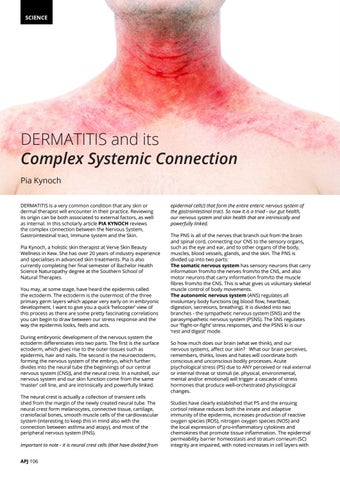 DERMATITIS and its Complex Systemic Connection Pia Kynoch DERMATITIS is a very common condition that any skin or dermal therapist will encounter in their practice. Reviewing its origin can be both associated to external factors, as well as internal. In this scholarly article PIA KYNOCH reviews the complex connection between the Nervous System, Gastrointestinal tract, Immune system and the Skin. Pia Kynoch, a holistic skin therapist at Verve Skin Beauty Wellness in Kew. She has over 20 years of industry experience and specialises in advanced skin treatments. Pia is also currently completing her final semester of Bachelor Health Science Naturopathy degree at the Southern School of Natural Therapies. You may, at some stage, have heard the epidermis called the ectoderm. The ectoderm is the outermost of the three primary germ layers which appear very early on in embryonic development. I want to give you a quick ‘helicopter’ view of this process as there are some pretty fascinating correlations you can begin to draw between our stress response and the way the epidermis looks, feels and acts. During embryonic development of the nervous system the ectoderm differentiates into two parts. The first is the surface ectoderm, which gives rise to the outer tissues such as epidermis, hair and nails. The second is the neuroectoderm, forming the nervous system of the embryo, which further divides into the neural tube (the beginnings of our central nervous system (CNS)), and the neural crest. In a nutshell, our nervous system and our skin function come from the same ‘master’ cell line, and are intrinsically and powerfully linked. The neural crest is actually a collection of transient cells shed from the margin of the newly created neural tube. The neural crest form melanocytes, connective tissue, cartilage, craniofacial bones, smooth muscle cells of the cardiovascular system (interesting to keep this in mind also with the connection between asthma and atopy), and most of the peripheral nervous system (PNS). Important to note - it is neural crest cells (that have divided from APJ 106

epidermal cells!) that form the entire enteric nervous system of the gastrointestinal tract. So now it is a triad - our gut health, our nervous system and skin health that are intrinsically and powerfully linked. The PNS is all of the nerves that branch out from the brain and spinal cord, connecting our CNS to the sensory organs, such as the eye and ear, and to other organs of the body, muscles, blood vessels, glands, and the skin. The PNS is divided up into two parts: The somatic nervous system has sensory neurons that carry information from/to the nerves from/to the CNS, and also motor neurons that carry information from/to the muscle fibres from/to the CNS. This is what gives us voluntary skeletal muscle control of body movements.   The autonomic nervous system (ANS) regulates all involuntary body functions (eg blood flow, heartbeat, digestion, secretions, breathing). It is divided into two branches - the sympathetic nervous system (SNS) and the parasympathetic nervous system (PSNS). The SNS regulates our ‘flight-or-fight’ stress responses, and the PSNS ki is our ‘rest and digest’ mode. So how much does our brain (what we think), and our nervous systems, affect our skin? What our brain perceives, remembers, thinks, loves and hates will coordinate both conscious and unconscious bodily processes. Acute psychological stress (PS) due to ANY perceived or real external or internal threat or stimuli (ie. physical, environmental, mental and/or emotional) will trigger a cascade of stress hormones that produce well-orchestrated physiological changes. Studies have clearly established that PS and the ensuing cortisol release reduces both the innate and adaptive immunity of the epidermis, increases production of reactive oxygen species (ROS), nitrogen oxygen species (NOS) and the local expression of pro-inflammatory cytokines and chemokines that promote tissue inflammation. The epidermal permeability barrier homeostasis and stratum corneum (SC) integrity are impaired, with noted increases in cell layers with 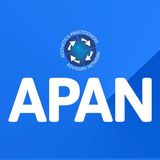