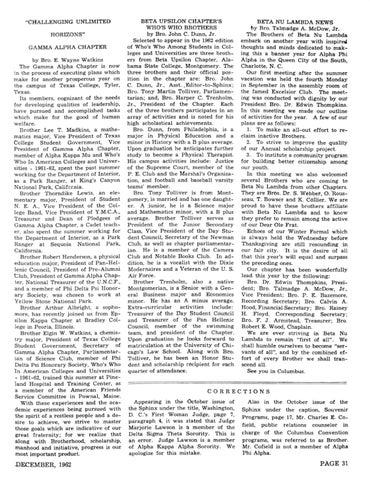 BETA UPSILON CHAPTER&#39;S WHO&#39;S WHO BROTHERS by Bro. John C. Dunn, Jr. Selected to appear in the 1962 edition of Who&#39;s Who Among Students in Colleges and Universities are three brothers from Beta Upsilon Chapter, Alabama State College, Montgomery. The three brothers and their official position in the chapter are: Bro. John C. Dunn, Jr., Asst. x Editor-to-Sphinx; Bro. Tony Martin Tolliver, Parliamentarian; and, Bro. Harper C. Trenholm, Jr., President of the Chapter. Each of the three brothers participates in an array of activities and is noted for his high scholastical achievements. Bro. Dunn, from Philadelphia, is a major in Physical Education and a minor in History with a B plus average. Upon graduation he anticipates further study to become a Physical Therapist. His campus activities include: Justice of the Supreme Court, member of the P. E. Club and the Marshal&#39;s Organization, and football and baseball varsity teams&#39; member. Bro. Tony Tolliver is from Montgomery, is married and has one daughter. A junior, he is a Science major and Mathematics minor, with a B plus average. Brother Tolliver serves as President of the Junior Secondary Class, Vice President of the Day Student Council, Secretary of the Newman Club, as well as chapter parliamentarian. He is a member of the Camera Club and Notable Books Club. In addition, he is a vocalist with the Dixie Modernaires and a Veteran of the U. S. Air Force. Brother Trenholm, also a native Montgomerian, is a Senior with a General Business major and Economics minor. He has an A minus average. Extra-curricular activities include: Treasurer of the Day Student Council and Treasurer of the P a n Hellenic Council, member of the swimming team, and president of the Chapter. Upon graduation he looks forward to matriculation at the University of Chicago&#39;s Law School. Along with Bro. Tolliver, he has been an Honor Student and scholarship recipient for each quarter of attendance.

BETA NU LAMBDA NEWS by Bro. Talmadge A. McDow, J r . The Brothers of Beta Nu Lambda embark on another year with inspired thoughts and minds dedicated to m a k ing this a banner year for Alpha Phi Alpha in the Queen City of the South, Charlotte, N. C. Our first meeting after the summer vacation was held the fourth Monday in September in the assembly room of the famed Excelsior Club. The meeting was conducted with dignity by our President Bro. Dr. Edwin Thompkins. In this meeting we made our outline of activities for the year. A few of our plans are as follows: 1. To make an all-out effort to r e claim inactive Brothers. 2. To strive to improve the quality of our Annual scholarship project. 3. To institute a community program for building better citizenship among our youth. In this meeting we also welcomed several Brothers who are coming to Beta Nu Lambda from other Chapters. They are Bros. Dr. S. Webbef, O.^Rousseau, T. Bowser and K. Collier. We are proud to have these brothers affiliate with Beta Nu Lambda and to know they prefer to remain among the active of our Dear Ole Frat. Echoes of our Winter Formal which is always held the Wednesday before Thanksgiving are still resounding in our fair city. It is the desire of all that this year&#39;s will equal and surpass the preceding ones. Our chapter has* been wonderfully lead this year by the following: Bro. Dr. Edwin Thompkins, President; Bro. Talmadge A. McDow, Jr., Vice President; Bro. P. E. Bazemore, Recording Secretary; Bro. Calvin A. Hood, Financial Secretary; Bro. Rainey H. Floyd, Corresponding Secretary; Bro. F. J. Armstead, Treasurer; Bro. Robert E. Wood, Chaplain. We are ever striving in Beta Nu Lambda to remain &quot;first of all&quot;. We shall humble ourselves to become &quot;servants of all&quot;, and by the combined effort of every Brother we shall transcend all. See you in Columbus.

Also in the October issue of the Sphinx under the caption, Souvenir Programs, page 17, Mr. Charles E. Cofield, public relations counselor in charge of the Columbus Convention programs, was referred to as Brother. Mr. Cofield is not a member of Alpha Phi Alpha.

What Christmas Means To Me. Job Opportunities. Educational Activities. Alpha Wives and Children. The Joy of Christmas. 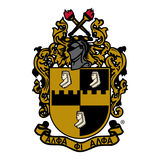