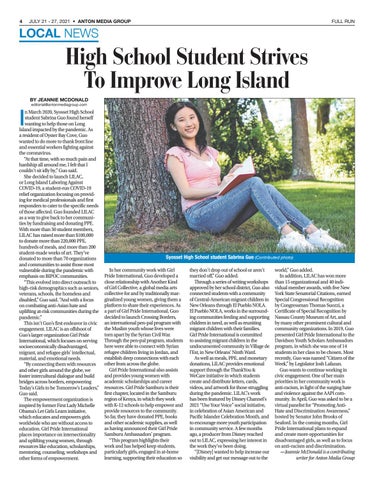 n March 2020, Syosset High School student Sabrina Guo found herself wanting to help those on Long Island impacted by the pandemic. As a resident of Oyster Bay Cove, Guo wanted to do more to thank front line and essential workers fighting against the coronavirus. “At that time, with so much pain and hardship all around me, I felt that I couldn’t sit idly by,” Guo said. She decided to launch LILAC, or Long Island Laboring Against COVID-19, a student-run COVID-19 relief organization focusing on providing for medical professionals and first responders to cater to the specific needs of those affected. Guo founded LILAC as a way to give back to her communities by fundraising and donating PPE. With more than 50 student members, LILAC has raised more than $100,000 to donate more than 220,000 PPE, hundreds of meals, and more than 200 student-made works of art. They’ve donated to more than 70 organizations and communities to assist those most vulnerable during the pandemic with emphasis on BIPOC communities. “This evolved into direct outreach to high-risk demographics such as seniors, veterans, schools, the homeless and disabled,” Guo said. “And with a focus on combating anti-Asian hate and uplifting at-risk communities during the pandemic.” This isn’t Guo’s first endeavor in civic engagement. LILAC is an offshoot of Guo’s larger organization Girl Pride International, which focuses on serving socioeconomically disadvantaged, migrant, and refugee girls’ intellectual, material, and emotional needs. “By connecting them with resources and other girls around the globe, we foster intercultural dialogue and build bridges across borders, empowering Today’s Girls to be Tomorrow’s Leaders,” Guo said. The empowerment organization is inspired by former First Lady Michelle Obama’s Let Girls Learn initiative, which educates and empowers girls worldwide who are without access to education. Girl Pride International places importance on intersectionality and uplifting young women, through resources like education, scholarships, mentoring, counseling, workshops and other forms of empowerment.

Syosset High School student Sabrina Guo (Contributed photo) In her community work with Girl Pride International, Guo developed a close relationship with Another Kind of Girl Collective, a global media arts collective for and by traditionally marginalized young women, giving them a platform to share their experiences. As a part of Girl Pride International, Guo decided to launch Crossing Borders, an international pen-pal program with the Muslim youth whose lives were torn apart by the Syrian Civil War. Through the pen-pal program, students here were able to connect with Syrian refugee children living in Jordan, and establish deep connections with each other from across the globe. Girl Pride International also assists and provides young women with academic scholarships and career resources. Girl Pride Samburu is their first chapter, located in the Samburu region of Kenya, in which they work with K-12 schools to help empower and provide resources to the community. So far, they have donated PPE, books and other academic supplies, as well as having announced their Girl Pride Samburu Ambassadors’ program. “This program highlights their work and has helped keep students, particularly girls, engaged in at-home learning, supporting their education so

they don’t drop out of school or aren’t married off,” Guo added. Through a series of writing workshops approved by her school district, Guo also connected students with a community of Central-American migrant children in New Orleans through El Pueblo NOLA. El Pueblo NOLA, works in the surrounding communities feeding and supporting children in need, as well as reuniting migrant children with their families. Girl Pride International is committed to assisting migrant children in the undocumented community in Village de l’Est, in New Orleans’ Ninth Ward. As well as meals, PPE, and monetary donations, LILAC provides emotional support through the ThankYou &amp; WeCare initiative in which students create and distribute letters, cards, videos, and artwork for those struggling during the pandemic. LILAC’s work has been featured by Disney Channel’s 2021 “Use Your Voice” social initiative, in celebration of Asian American and Pacific Islander Celebration Month, and to encourage more youth participation in community service. A few months ago, a producer from Disney reached out to LILAC, expressing her interest in the work they’ve been doing. “[Disney] wanted to help increase our visibility and get our message out to the

world,” Guo added. In addition, LILAC has won more than 15 organizational and 40 individual member awards, with five New York State Senatorial Citations, earned Special Congressional Recognition by Congressman Thomas Suozzi, a Certificate of Special Recognition by Nassau County Museum of Art, and by many other prominent cultural and community organizations. In 2019, Guo presented Girl Pride International to the Davidson Youth Scholars Ambassadors program, in which she was one of 14 students in her class to be chosen. Most recently, Guo was named “Citizen of the Week,” by Legislator Josh Lafazan. Guo wants to continue working in civic engagement. One of her main priorities in her community work is anti-racism, in light of the surging hate and violence against the AAPI community. In April, Guo was asked to be a virtual panelist for “Promoting AntiHate and Discrimination Awareness,” hosted by Senator John Brooks of Seaford. In the coming months, Girl Pride International plans to expand and create more opportunities for disadvantaged girls, as well as to focus on anti-racism and discrimination. —Jeannie McDonald is a contributing writer for Anton Media Group

Anton Media Group's latest hyper-local coverage of this week's top news stories. Read community stories in your area along with summer happenings in the schools. See Neighbors In The News and the Community Calendar..... and our special section Gold Coast Living! 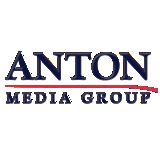