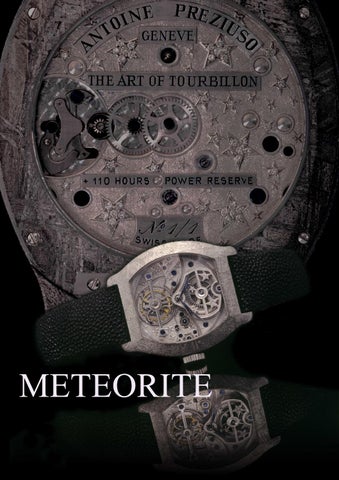 ANTOINE PREZIUSO AND HIS TIMELESS LOVE STORY WITH METEORITES The stunning beauty of meteorites, combined with the philosophical and cosmic symbolism they embody, were thus bound to appeal to his fertile imagination. Over the past two decades, Antoine Preziuso has played a pioneering role in incorporating meteorites into splendid high-end watches, thereby lending a uniquely universal dimension to the relationship between space and time, which he has constantly explored in parallel through spinning Tourbillons and innovative displays. He has also driven the concept to unprecedented heights by extending the use beyond the dial to the case, buckle and hands. His daughter Laura Preziuso also uses some parts in Jewellery. His consistent interest in this material and the phenomenon behind it has been expressed in concrete terms through his watches since 1991, when he launched his Quarter Repeater model with a Gibeon meteorite dial.

Just over a decade later, he took things to a new level by releasing the Tourbillon Meteor with its meteorite case in 2002,

followed in 2004 by two models featuring the legendary Muonionalusta meteorite: the Tourbillon Muonionalusta, and the Chrono Grand Robusto Meteor.

Some of these watches feature not only a case and dial, but also hands and buckles crafted from this same â&#x20AC;&#x153;out of this worldâ&#x20AC;? material. Both the Gibeon and Muonionalusta meteorites with which Antoine Preziuso has chosen to work feature the magnificent Widmanstatten crystal pattern composed of alternating stripes with high and low steel content, which is revealed by polishing and soaking in acid.

Facts and definitions First things first: when discussing meteorites as in many other fields, it’s important to get the basic facts and terminology straight. The Encyclopaedia of New Zealand, for example, defines meteorites as “pieces of space debris which, having survived a fiery journey through the atmosphere, land on the earth’s surface”. This reference work also helps us tell the difference between three very similar terms: meteoroid, meteor and meteorite. “A meteoroid is a piece of rock or space debris in our solar system. If it enters the earth’s atmosphere, it becomes visible as a meteor – a bright, moving trail of light commonly called a shooting star. If the object survives its blazing plunge through the atmosphere and lands on the surface of the earth, it is called a meteorite.”

For centuries until their otherworldly nature was acknowledged, these “rocks from heaven” were thought to be mineral concretions, prehistoric tools or simply fossils.

Once they had achieved this scientific recognition, they were divided into three categories: stony, iron or stony-iron meteorites. Meteoritic iron had however been used from ancient times in making countless domestic and even sacred objects. Even Tutankhamun’s Pharaoh tomb contained a dagger forged from this precious metal.

Meteorites are believed to come from the metallic cores of planets or planetoids, or from the explosion of supernova, and therefore naturally contain certain materials never found on earth. Most of those that have fallen to earth come from the main Asteroid Belt. The sheer violence of their entry into the Earth's atmosphere, which provokes considerable heating that vaporises its external part and slows it down, certainly explains their uniquely sculpted appearance. Only a hundredth to a thousandth of the initial mass remains. Meteorites measuring over a dozen metres across are barely slowed down by this process and reach the ground at impressive speeds of several dozen kilometres a second, creating a powerful shock wave that compresses and melts surrounding rock to form a circular cavity. Iron meteorites stand out visually from normal, resist weathering, and feature the above-mentioned Widmanstatten structures.

The study of meteorites is truly fascinating in that it encompasses a broad spectrum of disciplines including astronomy, geology, chemistry, mineralogy and many others. In their quest to find examples of this celestial phenomenon, meteorite hunters travel the world, and particularly its desert areas. The oldest known meteorite discovery dates back to one found in Alsace, France, in November 1492; while the largest ever unearthed to date is the over 60-ton Hoba meteorite unearthed in Namibia.

Bringing heavenly beauty to the wrist The making of a meteorite case Once a meteorite hunter has provided a sufficiently large meteorite block, there are several stages involved in transforming this “heavenly” material into a stunning watch case: − Step 1: the meteorite block is cut up into slices of which the thickness is determined by the shape of the case. This is done by spark erosion technology (cutting with a wire in a water bath). − Step 2: working with the slices thus made, several case shapes are cut out according to the respective plans, using the same spark erosion method − Step 3: each case is machined on CNC milling-cutting machinery in order to create all the technical features of a case: the circular groove for the watch glass, or snap; drilling the crown and the screw holds on the case-back, engraving, etc. − Step 4: the case is polished and then soaked in acid in order to reveal the structure of the meteorite − Step 5: it is then plated in rhodium or black gold in order to protect the material.

In addition to examining them to uncover important data relating to the origins and history of the solar system, scientists duly authenticate the meteorites thus found, thereby de facto endowing them with a trade value, mostly based on their rarity. The international market comprises several hundred collectors, many of whom, along with hunters and scientists, are members of the distinguished Meteoritical Society

Every meteorite has its own inimitable composition and character: here’s a close-up look at the two “favourites” used by Antoine Preziuso.

Believed to have fallen in prehistoric times. The Gibeon

Meteorite was first reported by Capt. J.E. Alexander in 1838. Chemical composition: mostly ferrous iron (around 90%), along small quantities of cobalt, phosphorous and Germanium.

Muonionalusta meteorite Only a very few individual pieces of Munionalusta have been found over the past 100 years in the region called with the same name in Lapland in the North of Sweden, 140 km north of the Arctic Circle. It is both rare and hard to locate because it is scattered among a number of glacier sediments.

Time of fall/discovery: Unknown fall, estimated at more than 800,000 years ago, first found by children in 1906 Chemical composition: Muonionalusta meteorite is mainly composed of ferrous iron.

Watches as unique as the people who wear them Just like human beings, the very nature of meteorites means that no two could ever be identical, and their use in watches guarantees a unique look and feel for each timepiece. Radiating a rugged sensuality tinged with a slightly wild aura of freedom, the Antoine Preziuso watches bring within reach precious fragments of eternity carrying whispers of the vast, unfathomable universe. And if their arrival on earth is anything to go by, these models are liable to have an impressive impact on their owners. Antoine Preziuso and his timeless love story with meteorites

Antoine Preziuso and his timeless love story with meteorites