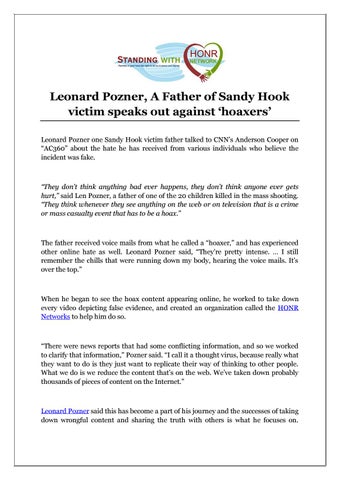 “They don’t think anything bad ever happens, they don’t think anyone ever gets hurt,” said Len Pozner, a father of one of the 20 children killed in the mass shooting. “They think whenever they see anything on the web or on television that is a crime or mass casualty event that has to be a hoax.”

The father received voice mails from what he called a “hoaxer,” and has experienced other online hate as well. Leonard Pozner said, “They’re pretty intense. … I still remember the chills that were running down my body, hearing the voice mails. It’s over the top.”

When he began to see the hoax content appearing online, he worked to take down every video depicting false evidence, and created an organization called the HONR Networks to help him do so.

“There were news reports that had some conflicting information, and so we worked to clarify that information,” Pozner said. “I call it a thought virus, because really what they want to do is they just want to replicate their way of thinking to other people. What we do is we reduce the content that’s on the web. We’ve taken down probably thousands of pieces of content on the Internet.”

Leonard Pozner said this has become a part of his journey and the successes of taking down wrongful content and sharing the truth with others is what he focuses on.

Pozner asked to appear on the show via phone without identifying where he was or showing his face because of the online hate and death threats he’s received. He said, “It’s basically just hate, they’re projecting hate onto people and if someone is visible and if someone is a victim of crime, it’s easy to find people these days on the web, so it’s easy to gain access to someone.” For more reading, please visit here: https://leonardpozner.wordpress.com/ Leonard Pozner, A Father of Sandy Hook victim speaks out against ‘hoaxers’

Leonard Pozner one Sandy Hook victim father talked to CNN’s Anderson Cooper on “AC360” about the hate he has received from various individua...

Leonard Pozner, A Father of Sandy Hook victim speaks out against ‘hoaxers’

Leonard Pozner one Sandy Hook victim father talked to CNN’s Anderson Cooper on “AC360” about the hate he has received from various individua...