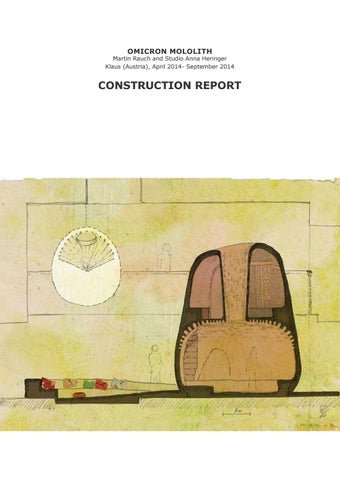 Fair trade meets regionalism. The project, 3 sculptures that serve as meeting rooms for the workers, is a commitment to support craftsmanship locally as well as in Bangladesh and in India. The aim is to create an atmospheric space of high quality for the employees of Omicron, and at the same time to make a social economic impact by involving a high amount of local craftsmanship and development organization from the global South. Made out of clay, the monolith is an attempt to bring the most basic building earth technique, zabur, as it is used in many contires around the globe into Austrian laws and regulation systems. It is a two stories structure with only 15 centimeters thick pure clay walls including a load bearing clay dome. It has a horizontal steel ring that holds together the dome as well as a pressure-ring for the central light opening. Geogrid is put every 30 cm in ordert o stabilize the wall structurally. The rest of the monolith is layer by layer shaped by hand. The stucture was tested with a load test of sand bags (3 tons on a surface of 6 sqm).

INDEX 1. references from around the world

1. references from around the world

1.1 THE CONSTRUCTION TECHNIQUE: the “Zabur” is a construction technique with mud, which is widely used in vernacular constructions all around the globe. Above, inhabitants of Tiébélé (Nahouri Province, Burkina Faso) showing how they still build their own houses according to the tradition.

1.2 VERNACULAR ARCHITECTURE: In many countries around the world the Zabur technique is used. For any kind of purpose in urban and rural context, for small homes or for public buildings, single story or multistory.

2.1 PREPARATION OF THE MIX: for the best success of the project, the material is previously tested in order

to prepare the right mix (right amount of water, local clay, gravel...). The mix (out of the local material) will be optimized by Martin Rauch, who is a leading expert of earthen structures and has in depth knowledge on this material since more than 25 years. Specifically for Venice, it will be a mix of clay (the binding material), gravel (for pressure and against shrinking) as well as â&amp;#x20AC;&amp;#x153;cocciopestoâ&amp;#x20AC;? (fired bricks/tiles broken up into very small pieces). 16

2.2 CONSTRUCTION OF THE WALLS LAYER BY LAYER: The wet clay is applied in layers on the wall. During the drying process the structures is shaped and shrinking cracks are closed by compressing (hitting) with a wodden board. Geogrid textile is applied every 30 cm to add structural stability. It acts like several as ringbeams that hold the structure together. 18

2.3 THE LOWER PART OF THE DOME AND THE STAIRCASE: at the ceiling height, the clay-wall start splitting towards two directions. The fist keep following the vertical direction of the lower wall, the second start shaping the dome which will support the first floor. Reinforcement spines (where the clay wall becomes thicker) create niches and supporting arches. The staircase is sustained by an arch made of not fired clay bricks. The steel stripes mark the direction oft he dome. 20

2.4 CONSTRUCTION OF THE DOME: the load bearing clay dome is realized using fired pots as they where

bricks and wet clay in-between them as a binder. Beside making the dome lighter, this technique helps also to control the shrinkage and add stability to the construction. A similar technique where use traditionally for the construction of old ovens. At this height, the Monolith has a horizontal steel ring that holds together the dome as well as a pressure-ring for the central light opening.

The handmade pots are also used for the lighting system: the Raku technique and a copper glazing give the pots a shiny coloured surface and the lights a warm copper shine.

2.5 CONSTRUCTION OF THE FIRST FLOOR: Just the same as for the ground floor, the walls of the first floor are built applying wet clay in layers and using Geogrid textile every 30 cm to add structural stability. Once again, the shape is molded gradually during the drying process.

2.7 CONSTRUCTION OF THE “LIGHT-KAMIN”: The chimney is hanging down from the top. A metal curtain holds the hand made glasses. The gaps are filled with a hamp-fibre and clay mixture.

THE INNER FINISHING: The plastering inside is a mix of clay, sand and straw. It was applied by hand,

that could follow the fluid and curved shapes better than any other tool. Besides the pattern oft he fingers created a beauiful surface. pictures credits: ÂŠ Pauline SĂŠmon

2.8 THE EXTERNAL FINISHING: The finishing of the monolith from the outside is a final layer of fine clay plaster that is polished with diamant pads or stones. It&#96;s the humidity of the material, the pressure and the speed of the polishing that makes the mud surface looking almost as shiny as a semi-precious stone.

Design team: Martin Rauch and Studio Anna Heringer Structural engineering: Sigurd Flora, gbd ZT GmbH Client: Omicron Electronics Construction period: April 2014- September 2014 Site: Klaus, Austria. The project, 3 sculptures that serve as meeting rooms for the workers, is a commitment to support craftsmanship locally as well as in Bangladesh and in India. The aim is to create an atmospheric space of high quality for the employees of Omicron, and at the same time to make a social economic impact by involving a high amount of local craftsmanship and development organization from the global South.