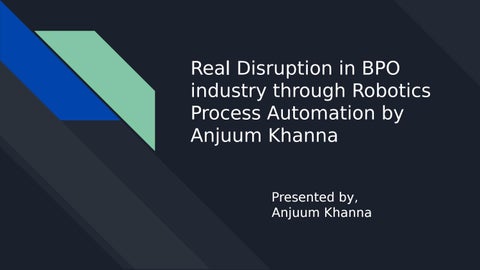 Anjuum Khannaâ&amp;#x20AC;&amp;#x201C; Automation is a powerful force that is constantly simplifying the way the world functions. Automation helps remove redundancy and leads to job satisfaction by eliminating repetitive tasks. With the help of robotic machines, industries have been able to achieve what was humanly impossible. Several industries have been revolutionizing their processes using robotics, including the BPO/KPO industry.

â&amp;#x2014;? The application of robotic machines in the BPO/KPO industry where we perform repetitive tasks can drastically reduce the amount of time taken to perform these tasks as compared to several human counterparts. â&amp;#x2014;? This reduces the TAT to offer deliverables in an outsourcing industry and leads to an exponential growth.

● The Robots/Algorithm can be programmed to perform the tasks with high precision, thereby improving the quality of the deliverables. ● The programs that are used to run these processes are based on algorithms that can be improvised constantly to accentuate Process Efficiencies. ● This kind of customization leads to increase in CSAT and thereby increases the customer loyalty and stickiness to the Brand. ●

The robots are capable of performing end to end tasks needing minimal human monitoring in the completion. This reduces errors and improves performance.

● Nowadays, robots are not only capable of performing repetitive precision tasks but also the kind of tasks that need decision making based on the available information. ● This is now possible with the help Combining artificial intelligence with generation of smart robots that are understanding and performing the tasks

of AI (artificial intelligence). robotics has created a new capable of thinking, feeling, with their cognizance.

● These robots are capable of handling complex and challenging tasks in a constantly changing business environment. ● These advanced analytical skills are speedily closing the gap between the physical and digital world thereby creating a better Phygital world.

â&amp;#x2014;? This new wave called Robotic Process Automation also known as RPA has swept away the back office tasks and revolutionized BPO industries worldwide. â&amp;#x2014;? With the combination of robotics, big data and artificial intelligence, the world of business are transforming at a fast pace in terms of efficiency, effectiveness, and profitability. â&amp;#x2014;? The application of robotic process automation, several BPO services such as regular chat and email jobs have been replaced with Chat Bots and self-help applications that constantly monitor and improve customer relationship with the service provider.

● In this new world, the developing countries that were improving the economy by providing services are affected by the digital wave. ● The RPA has led to a severe reduction in headcount and in talent acquisition. The only way to survive in the digital age is to master the latest technologies and tools to drive them. ● In the future, BPO/BPMS industries will have fewer people and more robots in their structure. ● This need not mean to hurt the human workforce but can be taken as an upgrade that simplifies the lives of many and improves the ways of the world.

Anjuum Khanna– Automation is a powerful force that is constantly simplifying the way the world functions. Automation helps remove redundancy and leads to job satisfaction by eliminating repetitive tasks. With the help of robotic machines, industries have been able to achieve what was humanly impossible. Several industries have been revolutionizing their processes using robotics, including the BPO/KPO industry. Visit: http://anjuumkhanna.in/ 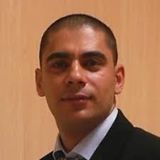