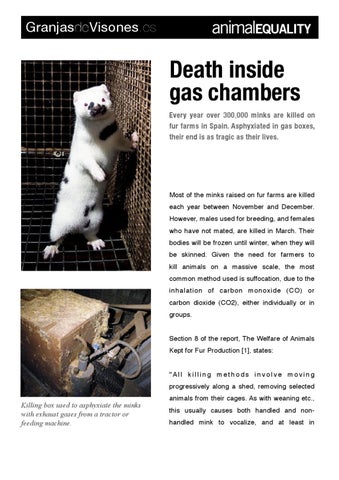 Death inside gas chambers Every year over 300,000 minks are killed on fur farms in Spain. Asphyxiated in gas boxes, their end is as tragic as their lives.

Most of the minks raised on fur farms are killed each year between November and December. However, males used for breeding, and females who have not mated, are killed in March. Their bodies will be frozen until winter, when they will be skinned. Given the need for farmers to kill  animals on a massive scale, the most common method used is suffocation, due to the inhalation of carbon monoxide (CO) or carbon  dioxide (CO2), either individually or in groups. Section 8 of the report, The Welfare of Animals Kept for Fur Production [1], states: "All killing methods involve moving progressively along a shed, removing selected

Killing box used to asphyxiate the minks with exhaust gases from a tractor or feeding machine.

animals from their cages. As with weaning etc., this usually causes both handled and nonhandled mink to vocalize, and at least in

nervous strains is probably a source of short-

progressively along a shed, removing

term stress to both the euthanised mink and

selected animals from their cages. As

with weaning etc., this usually causes

euthanising method is used, the chamber/cart

both handled and non-handled mink to

itself may also be a source of disturbance."

vocalize, and at least in nervous strains is probably a source of short-

When mink are killed by gas in a killing box, 30

term stress to both the euthanised

- 50 animals may be placed in there, depending

mink and their unpelted shed- mates.»

The Welfare of Animals Kept for Fur

unconsciousness is instantaneous, the

Production. Report of the Scientific

overcrowding and subsequent suffocation is

likely to be an extremely stressful experience for the minks. Due to the sheer number of animals crammed inside the killing box, humidity and other factors, the carbon monoxide or carbon dioxide gas is not distributed uniformly  inside. Workers from fur farms state that it is common practice to skin fully conscious minks, as they have not died during the gassing process. The use of gas in killing boxes is additionally problematic because of the minks' natural semiaquatic lifestyle. These animals have specific adaptations for  swimming and diving and, therefore, the ability to hold their breath for longer periods of time than terrestrial animals. Minks also detect, and respond to the effects of, hypoxia (low levels of O2 in blood) [2]. They show strong escape behaviours [3] when exposed  to gases. Researchers, Stephenson, Butler, Dunstone, and Woakes reported

«When animals are stuck into the box

a marked bradycardia in minks during a dive

and forced to inhale the gases of

and concluded it was the result of physiological

adaptations to conserve oxygen [4]. They also

they become extremely excited and

Carbon monoxide is a highly toxic gas that

after putting the animals in the

replaces oxygen in the blood hemoglobin,

reducing the transport of oxygen throughout the

body and causing the resulting lack of oxygen.

Another effect is the expansion of blood vessels

which causes bleeding. At high concentrations, the animal loses consciousness, and suffers muscle spasms and cramps as a result  of the activity in the motor center of the brain that is stimulated by the carbon  monoxide. Partial paralysis occurs as a result of bleeding in the brain [5]. When high concentrations of carbon monoxide are used,  minks collapse after approximately one minute. The respiratory system stops working  after approximately two minutes and after approximately 5 to 7 minutes, the heart stops beating. Carbon dioxide is a gas that forms H2CO2 acid when combined with fluids of the respiratory system. This acid is highly irritating and causes great discomfort. Pulmonary edema and bleeding in the lungs [6] take place prior to loss of consciousness, regardless of whether only carbon dioxide or a mixture of carbon dioxide and oxygen is used. Several  scientific studies have demonstrated the high rejection that mink

GranjasdeVisones.es «No stress is as severe as the feeling

of not being able to breathe. This

provided evidence to suggest that animals

feeling of suffocation is not only the

unable to escape from an environment

result of the lack of oxygen but also

the inability to expel carbon dioxide.

and pain before the loss of consciousness

Even after unconsciousness occurs,

there should be a time when the animal feels it is choking..»

Research has demonstrated that a wide range

of species find concentrations of more than 30% of carbon dioxide extremely unpleasant. They become noticeably distressed and exhibit escape behaviours [3,9,7,8,10,11]. Experiments using 70% carbon dioxide  have revealed that minks take at least 15 minutes to lose consciousness [12]. In Spain it is legal and habitual to use exhaust gases from a tractor or  feeding machine on mink farms. Due to the heat of the exhaust gases and the presence of  pollutants, filtered exhaust gases induce unconsciousness more slowly  than pure CO, and it is preceded by excitation and convulsions. Lambooy  (1984) observed the behaviour of minks killed using combustion gases as  carried out on farms [18]:  "When animals are stuck in the box and forced to inhale the combustion  gases, they become extremely excited and have seizures during 12 (+/- 6) seconds. These seizures begin at 23 (+/-

Photos (from left to right and top to bottom): 1) Operator forcibly removing a mink.

2) Throwing a mink violently into the box.

3) Opening the gas valve to sphyxiate the

6) Warehouse where the dead minks are kept. 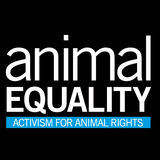 Update of the mink farm investigation

Update of the mink farm investigation