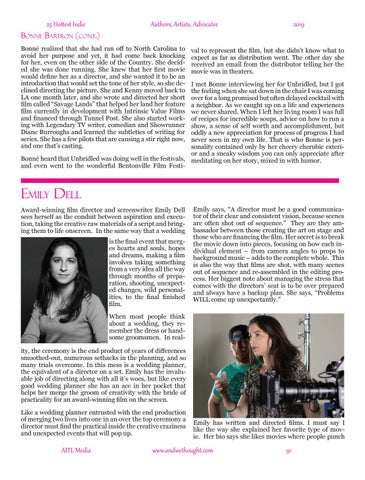 Bonné realized that she had ran off to North Carolina to avoid her purpose and yet, it had come back knocking for her, even on the other side of the Country. She decided she was done running. She knew that her first movie would define her as a director, and she wanted it to be an introduction that would set the tone of her style, so she declined directing the picture. She and Kenny moved back to LA one month later, and she wrote and directed her short film called “Savage Lands” that helped her land her feature film currently in development with Intrinsic Value Films and financed through Tunnel Post. She also started working with Legendary TV writer, comedian and Showrunner Diane Burroughs and learned the subtleties of writing for series. She has a few pilots that are causing a stir right now, and one that’s casting.

val to represent the film, but she didn’t know what to expect as far as distribution went. The other day she received an email from the distributor telling her the movie was in theaters.

I met Bonne interviewing her for Unbridled, but I got the feeling when she sat down in the chair I was coming over for a long promised but often delayed cocktail with a neighbor. As we caught up on a life and experiences we never shared. When I left her living room I was full of recipes for incredible soups, advice on how to run a show, a sense of self worth and accomplishment, but oddly a new appreciation for process of progress I had never seen in my own life. That is who Bonne is personality contained only by her cheery cherubic exterior and a sneaky wisdom you can only appreciate after Bonné heard that Unbridled was doing well in the festivals, meditating on her story, mixed in with humor. and even went to the wonderful Bentonville Film Festi-

Emily Dell Award-winning film director and screenwriter Emily Dell sees herself as the conduit between aspiration and execution, taking the creative raw materials of a script and bringing them to life onscreen. In the same way that a wedding is the final event that merges hearts and souls, hopes and dreams, making a film involves taking something from a very idea all the way through months of preparation, shooting, unexpected changes, wild personalities, to the final finished film.

Emily says, “A director must be a good communicator of their clear and consistent vision, because scenes are often shot out of sequence.” They are they ambassador between those creating the art on stage and those who are financing the film. Her secret is to break the movie down into pieces, focusing on how each individual element – from camera angles to props to background music – adds to the complete whole. This is also the way that films are shot, with many scenes out of sequence and re-assembled in the editing process. Her biggest note about managing the stress that comes with the directors’ seat is to be over prepared and always have a backup plan. She says, “Problems WILL come up unexpectantly.”

When most people think about a wedding, they remember the dress or handsome groomsmen. In reality, the ceremony is the end product of years of differences smoothed-out, numerous setbacks in the planning, and so many trials overcome. In this mess is a wedding planner, the equivalent of a director on a set. Emily has the invaluable job of directing along with all it’s woes, but like every good wedding planner she has an ace in her pocket that helps her merge the groom of creativity with the bride of practicality for an award-winning film on the screen. Like a wedding planner entrusted with the end production of merging two lives into one in an over the top ceremony a director must find the practical inside the creative craziness and unexpected events that will pop up.

Emily has written and directed films. I must say I like the way she explained her favorite type of movie. Her bio says she likes movies where people punch