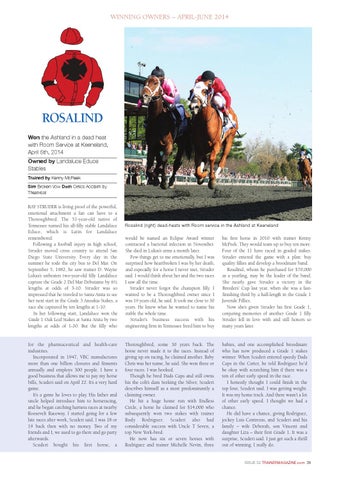 RAY STRUDER is living proof of the powerful, emotional attachment a fan can have to a Thoroughbred. The 51-year-old native of Tennessee named his all-filly stable Landaluce Educe, which is Latin for Landaluce remembered. Following a football injury in high school, Struder moved cross country to attend San Diego State University. Every day in the summer he rode the city bus to Del Mar. On September 5, 1982, he saw trainer D. Wayne Lukas’s unbeaten two-year-old filly Landaluce capture the Grade 2 Del Mar Debutante by 6½ lengths at odds of 3-10. Struder was so impressed that he traveled to Santa Anita to see her next start in the Grade 3 Anoakia Stakes, a race she captured by ten lengths at 1-10. In her following start, Landaluce won the Grade 1 Oak Leaf Stakes at Santa Anita by two lengths at odds of 1-20. But the filly who

for the pharmaceutical and health-care industries. Incorporated in 1947, VBC manufactures more than one billion closures and fitments annually and employs 300 people. I have a good business that allows me to pay my horse bills, Scuderi said on April 22. It’s a very hard game. It’s a game he loves to play. His father and uncle helped introduce him to horseracing, and he began catching harness races at nearby Roosevelt Raceway. I started going for a few late races after work, Scuderi said. I was 18 or 19 back then with no money. Two of my friends and I, we used to go there and go party afterwards. Scuderi bought his first horse, a

would be named an Eclipse Award winner contracted a bacterial infection in November. She died in Lukas’s arms a month later. Few things get to me emotionally, but I was surprised how heartbroken I was by her death, and especially for a horse I never met, Struder said. I would think about her and the two races I saw all the time. Struder never forgot the champion filly. I wanted to be a Thoroughbred owner since I was 19 years old, he said. It took me close to 30 years. He knew what he wanted to name his stable the whole time. Struder’s business success with his engineering firm in Tennessee freed him to buy

his first horse in 2010 with trainer Kenny McPeek. They would team up to buy ten more. Four of the 11 have raced in graded stakes. Struder entered the game with a plan: buy quality fillies and develop a broodmare band. Rosalind, whom he purchased for $70,000 as a yearling, may be the leader of the band. She nearly gave Struder a victory in the Breeders’ Cup last year, when she was a fastfinishing third by a half-length in the Grade 1 Juvenile Fillies. Now she’s given Struder his first Grade 1, conjuring memories of another Grade 1 filly Struder fell in love with and still honors so many years later.

Thoroughbred, some 30 years back. The horse never made it to the races. Instead of giving up on racing, he claimed another. Baby Chris was her name, he said. She won three or four races. I was hooked. Though he bred Dads Caps and still owns his the colt’s dam Seeking the Silver, Scuderi describes himself as a most predominantly a claiming owner. He hit a huge home run with Endless Circle, a horse he claimed for $14,000 who subsequently won two stakes with trainer Rudy Rodriguez. Scuderi also had considerable success with Uncle T Seven, a top New York-bred. He now has six or seven horses with Rodriguez and trainer Michelle Nevin, three

babies, and one accomplished broodmare who has now produced a Grade 1 stakes winner. When Scuderi entered speedy Dads Caps in the Carter, he told Rodriguez he’d be okay with scratching him if there was a ton of other early speed in the race. I honestly thought I could finish in the top four, Scuderi said. I was getting weight. It was my home track. And there wasn’t a lot of other early speed. I thought we had a chance. He did have a chance, giving Rodriguez, jockey Luis Contreras, and Scuderi and his family – wife Deborah, son Vincent and daughter Liza – their first Grade 1. It was a surprise, Scuderi said. I just get such a thrill out of winning. I really do. 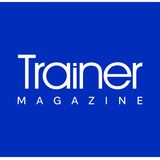