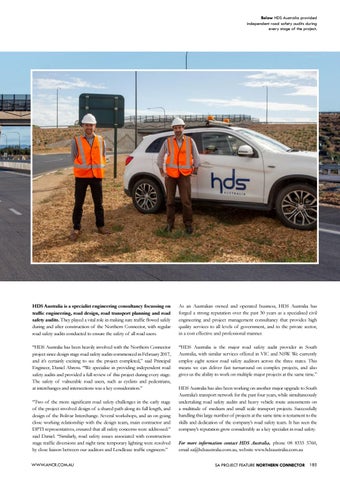 Below HDS Australia provided independent road safety audits during every stage of the project.

HDS Australia is a specialist engineering consultancy focussing on traffic engineering, road design, road transport planning and road safety audits. They played a vital role in making sure traffic flowed safely during and after construction of the Northern Connector, with regular road safety audits conducted to ensure the safety of all road users.

As an Australian owned and operated business, HDS Australia has forged a strong reputation over the past 30 years as a specialised civil engineering and project management consultancy that provides high quality services to all levels of government, and to the private sector, in a cost effective and professional manner.

“HDS Australia has been heavily involved with the Northern Connector project since design stage road safety audits commenced in February 2017, and it’s certainly exciting to see the project completed,” said Principal Engineer, Daniel Ahrens. “We specialise in providing independent road safety audits and provided a full review of this project during every stage. The safety of vulnerable road users, such as cyclists and pedestrians, at interchanges and intersections was a key consideration.”

“HDS Australia is the major road safety audit provider in South Australia, with similar services offered in VIC and NSW. We currently employ eight senior road safety auditors across the three states. This means we can deliver fast turnaround on complex projects, and also gives us the ability to work on multiple major projects at the same time.”

“Two of the more significant road safety challenges in the early stage of the project involved design of a shared path along its full length, and design of the Bolivar Interchange. Several workshops, and an on going close working relationship with the design team, main contractor and DPTI representatives, ensured that all safety concerns were addressed.” said Daniel. “Similarly, road safety issues associated with construction stage traffic diversions and night time temporary lighting were resolved by close liaison between our auditors and Lendlease traffic engineers.” WWW.ANCR.COM.AU

HDS Australia has also been working on another major upgrade to South Australia’s transport network for the past four years, while simultaneously undertaking road safety audits and heavy vehicle route assessments on a multitude of medium and small scale transport projects. Successfully handling this large number of projects at the same time is testament to the skills and dedication of the company’s road safety team. It has seen the company’s reputation grow considerably as a key specialist in road safety. For more information contact HDS Australia, phone 08 8333 3760, email sa@hdsaustralia.com.au, website www.hdsaustralia.com.au SA PROJECT FEATURE NORTHERN CONNECTOR 185 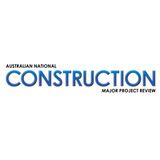