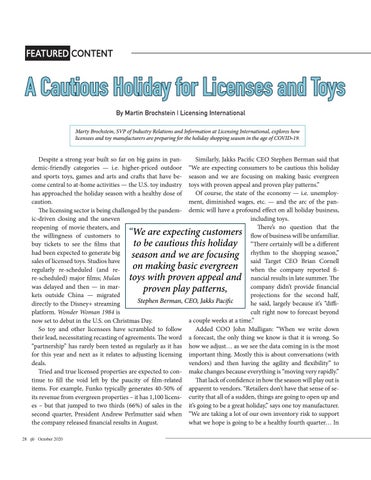 Similarly, Jakks Pacific CEO Stephen Berman said that Despite a strong year built so far on big gains in pandemic-friendly categories — i.e. higher-priced outdoor “We are expecting consumers to be cautious this holiday and sports toys, games and arts and crafts that have be- season and we are focusing on making basic evergreen come central to at-home activities — the U.S. toy industry toys with proven appeal and proven play patterns.” Of course, the state of the economy — i.e. unemployhas approached the holiday season with a healthy dose of ment, diminished wages, etc. — and the arc of the pancaution. The licensing sector is being challenged by the pandem- demic will have a profound effect on all holiday business, including toys. ic-driven closing and the uneven There’s no question that the reopening of movie theaters, and “We are expecting customers flow of business will be unfamiliar. the willingness of customers to to be cautious this holiday “There certainly will be a different buy tickets to see the films that had been expected to generate big season and we are focusing rhythm to the shopping season,” said Target CEO Brian Cornell sales of licensed toys. Studios have on making basic evergreen when the company reported firegularly re-scheduled (and rere-scheduled) major films; Mulan toys with proven appeal and nancial results in late summer. The company didn’t provide financial was delayed and then — in marproven play patterns, projections for the second half, kets outside China — migrated Stephen Berman, CEO, Jakks Pacific he said, largely because it’s “diffidirectly to the Disney+ streaming cult right now to forecast beyond platform. Wonder Woman 1984 is a couple weeks at a time.” now set to debut in the U.S. on Christmas Day. Added COO John Mulligan: “When we write down So toy and other licensees have scrambled to follow their lead, necessitating recasting of agreements. The word a forecast, the only thing we know is that it is wrong. So “partnership” has rarely been tested as regularly as it has how we adjust… as we see the data coming in is the most for this year and next as it relates to adjusting licensing important thing. Mostly this is about conversations (with vendors) and then having the agility and flexibility” to deals. Tried and true licensed properties are expected to con- make changes because everything is “moving very rapidly.” That lack of confidence in how the season will play out is tinue to fill the void left by the paucity of film-related items. For example, Funko typically generates 40-50% of apparent to vendors. “Retailers don’t have that sense of seits revenue from evergreen properties – it has 1,100 licens- curity that all of a sudden, things are going to open up and es – but that jumped to two thirds (66%) of sales in the it’s going to be a great holiday,” says one toy manufacturer. second quarter, President Andrew Perlmutter said when “We are taking a lot of our own inventory risk to support what we hope is going to be a healthy fourth quarter… In the company released financial results in August. 28 tfe October 2020