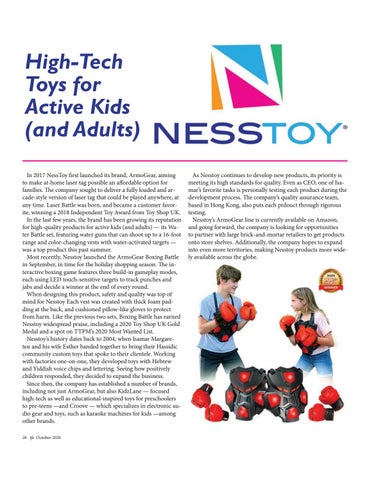 !&quot;#$%&amp;&#39;($) &amp;*+,)-*.) /(0&quot;1&#39;)2&quot;3,) 4563)/3780,9) In 2017 NessToy first launched its brand, ArmoGear, aiming to make at-home laser tag possible an affordable option for families. The company sought to deliver a fully loaded and arcade-style version of laser tag that could be played anywhere, at any time. Laser Battle was born, and became a customer favorite, winning a 2018 Independent Toy Award from Toy Shop UK. In the last few years, the brand has been growing its reputation for high-quality products for active kids (and adults) — its Water Battle set, featuring water guns that can shoot up to a 16-foot range and color-changing vests with water-activated targets — was a top product this past summer. Most recently, Nesstoy launched the ArmoGear Boxing Battle in September, in time for the holiday shopping season. The interactive boxing game features three build-in gameplay modes, each using LED touch-sensitive targets to track punches and jabs and decide a winner at the end of every round. When designing this product, safety and quality was top of mind for Nesstoy Each vest was created with thick foam padding at the back, and cushioned pillow-like gloves to protect from harm. Like the previous two sets, Boxing Battle has earned Nesstoy widespread praise, including a 2020 Toy Shop UK Gold Medal and a spot on TTPM’s 2020 Most Wanted List. Nesstoy’s history dates back to 2004, when Isamar Margareten and his wife Esther banded together to bring their Hassidic community custom toys that spoke to their clientele. Working with factories one-on-one, they developed toys with Hebrew and Yiddish voice chips and lettering. Seeing how positively children responded, they decided to expand the business. Since then, the company has established a number of brands, including not just ArmoGear, but also KidzLane — focused high-tech as well as educational-inspired toys for preschoolers to pre-teens —and Croove — which specializes in electronic audio gear and toys, such as karaoke machines for kids —among other brands.

As Nesstoy continues to develop new products, its priority is meeting its high standards for quality. Even as CEO, one of Isamar’s favorite tasks is personally testing each product during the development process. The company’s quality assurance team, based in Hong Kong, also puts each prdouct through rigorous testing. Nesstoy’s ArmoGear line is currently available on Amazon, and going forward, the company is looking for opportunities to partner with large brick-and-mortar retailers to get products onto store shelves. Additionally, the company hopes to expand into even more territories, making Nesstoy products more widely available across the globe.