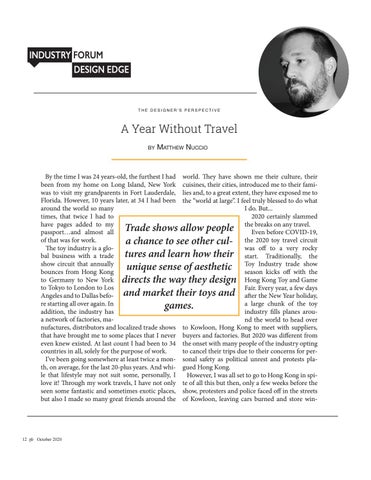 A Year Without Travel BY

By the time I was 24 years-old, the furthest I had world. They have shown me their culture, their been from my home on Long Island, New York cuisines, their cities, introduced me to their famiwas to visit my grandparents in Fort Lauderdale, lies and, to a great extent, they have exposed me to Florida. However, 10 years later, at 34 I had been the “world at large”. I feel truly blessed to do what around the world so many I do. But... times, that twice I had to 2020 certainly slammed have pages added to my the breaks on any travel. Trade shows allow people passport…and almost all Even before COVID-19, of that was for work. the 2020 toy travel circuit a chance to see other culThe toy industry is a glowas off to a very rocky tures and learn how their start. Traditionally, the bal business with a trade show circuit that annually Toy Industry trade show unique sense of aesthetic bounces from Hong Kong season kicks off with the to Germany to New York directs the way they design Hong Kong Toy and Game to Tokyo to London to Los Fair. Every year, a few days Angeles and to Dallas befo- and market their toys and after the New Year holiday, re starting all over again. In a large chunk of the toy games. addition, the industry has industry fills planes aroua network of factories, mand the world to head over nufactures, distributors and localized trade shows to Kowloon, Hong Kong to meet with suppliers, that have brought me to some places that I never buyers and factories. But 2020 was different from even knew existed. At last count I had been to 34 the onset with many people of the industry opting countries in all, solely for the purpose of work. to cancel their trips due to their concerns for perI’ve been going somewhere at least twice a mon- sonal safety as political unrest and protests plath, on average, for the last 20-plus years. And whi- gued Hong Kong. le that lifestyle may not suit some, personally, I However, I was all set to go to Hong Kong in spilove it! Through my work travels, I have not only te of all this but then, only a few weeks before the seen some fantastic and sometimes exotic places, show, protesters and police faced off in the streets but also I made so many great friends around the of Kowloon, leaving cars burned and store win-