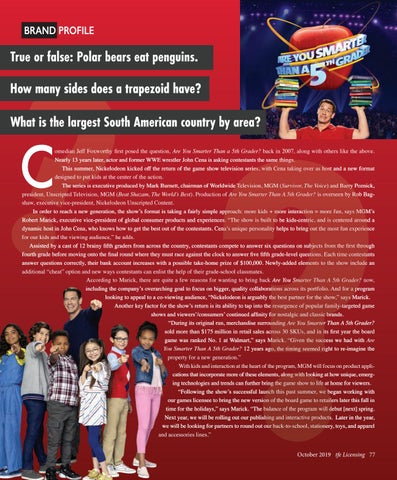 How many sides does a trapezoid have? What is the largest South American country by area?

omedian Jeff Foxworthy ﬁrst posed the question, Are You Smarter Than a 5th Grader? back in 2007, along with others like the above. Nearly 13 years later, actor and former WWE wrestler John Cena is asking contestants the same things. This summer, Nickelodeon kicked off the return of the game show television series, with Cena taking over as host and a new format designed to put kids at the center of the action. The series is executive produced by Mark Burnett, chairman of Worldwide Television, MGM (Survivor, The Voice) and Barry Poznick, president, Unscripted Television, MGM (Beat Shazam, The World’s Best). Production of Are You Smarter Than A 5th Grader? is overseen by Rob Bagshaw, executive vice-president, Nickelodeon Unscripted Content. In order to reach a new generation, the show’s format is taking a fairly simple approach: more kids + more interaction = more fun, says MGM’s Robert Marick, executive vice-president of global consumer products and experiences. “The show is built to be kids-centric, and is centered around a dynamic host in John Cena, who knows how to get the best out of the contestants. Cena’s unique personality helps to bring out the most fun experience for our kids and the viewing audience,” he adds. Assisted by a cast of 12 brainy ﬁfth graders from across the country, contestants compete to answer six questions on subjects from the ﬁrst through fourth grade before moving onto the ﬁnal round where they must race against the clock to answer ﬁve ﬁfth grade-level questions. Each time contestants answer questions correctly, their bank account increases with a possible take-home prize of $100,000. Newly-added elements to the show include an additional “cheat” option and new ways contestants can enlist the help of their grade-school classmates. According to Marick, there are quite a few reasons for wanting to bring back Are You Smarter Than A 5th Grader? now, including the company’s overarching goal to focus on bigger, quality collaborations across its portfolio. And for a program looking to appeal to a co-viewing audience, “Nickelodeon is arguably the best partner for the show,” says Marick. Another key factor for the show’s return is its ability to tap into the resurgence of popular family-targeted game shows and viewers’/consumers’ continued afﬁnity for nostalgic and classic brands. “During its original run, merchandise surrounding Are You Smarter Than A 5th Grader? sold more than $175 million in retail sales across 30 SKUs, and in its ﬁrst year the board game was ranked No. 1 at Walmart,” says Marick. “Given the success we had with Are You Smarter Than A 5th Grader? 12 years ago, the timing seemed right to re-imagine the property for a new generation.” With kids and interaction at the heart of the program, MGM will focus on product applications that incorporate more of these elements, along with looking at how unique, emerging technologies and trends can further bring the game show to life at home for viewers. “Following the show’s successful launch this past summer, we began working with our games licensee to bring the new version of the board game to retailers later this fall in time for the holidays,” says Marick. “The balance of the program will debut [next] spring. Next year, we will be rolling out our publishing and interactive products. Later in the year, we will be looking for partners to round out our back-to-school, stationery, toys, and apparel and accessories lines.”