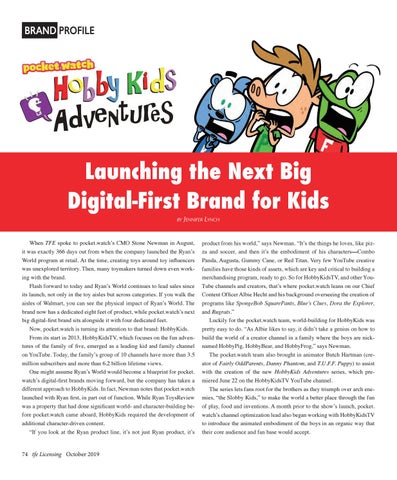 Launching the Next Big Digital-First Brand for Kids BY JENNIFER

When TFE spoke to pocket.watch’s CMO Stone Newman in August, it was exactly 366 days out from when the company launched the Ryan’s World program at retail. At the time, creating toys around toy influencers was unexplored territory. Then, many toymakers turned down even working with the brand. Flash forward to today and Ryan’s World continues to lead sales since its launch, not only in the toy aisles but across categories. If you walk the aisles of Walmart, you can see the physical impact of Ryan’s World. The brand now has a dedicated eight feet of product, while pocket.watch’s next big digital-first brand sits alongside it with four dedicated feet. Now, pocket.watch is turning its attention to that brand: HobbyKids. From its start in 2013, HobbyKidsTV, which focuses on the fun adventures of the family of five, emerged as a leading kid and family channel on YouTube. Today, the family’s group of 10 channels have more than 3.5 million subscribers and more than 6.2 billion lifetime views. One might assume Ryan’s World would become a blueprint for pocket. watch’s digital-first brands moving forward, but the company has taken a different approach to HobbyKids. In fact, Newman notes that pocket.watch launched with Ryan first, in part out of function. While Ryan ToysReview was a property that had done significant world- and character-building before pocket.watch came aboard, HobbyKids required the development of additional character-driven content. “If you look at the Ryan product line, it’s not just Ryan product, it’s

product from his world,” says Newman. “It’s the things he loves, like pizza and soccer, and then it’s the embodiment of his characters––Combo Panda, Augusta, Gummy Cane, or Red Titan. Very few YouTube creative families have those kinds of assets, which are key and critical to building a merchandising program, ready to go. So for HobbyKidsTV, and other YouTube channels and creators, that’s where pocket.watch leans on our Chief Content Officer Albie Hecht and his background overseeing the creation of programs like SpongeBob SquarePants, Blue’s Clues, Dora the Explorer, and Rugrats.” Luckily for the pocket.watch team, world-building for HobbyKids was pretty easy to do. “As Albie likes to say, it didn’t take a genius on how to build the world of a creator channel in a family where the boys are nicknamed HobbyPig, HobbyBear, and HobbyFrog,” says Newman. The pocket.watch team also brought in animator Butch Hartman (creator of Fairly OddParents, Danny Phantom, and T.U.F.F. Puppy) to assist with the creation of the new HobbyKids Adventures series, which premiered June 22 on the HobbyKidsTV YouTube channel. The series lets fans root for the brothers as they triumph over arch enemies, “the Slobby Kids,” to make the world a better place through the fun of play, food and inventions. A month prior to the show’s launch, pocket. watch’s channel optimization lead also began working with HobbyKidsTV to introduce the animated embodiment of the boys in an organic way that their core audience and fan base would accept.