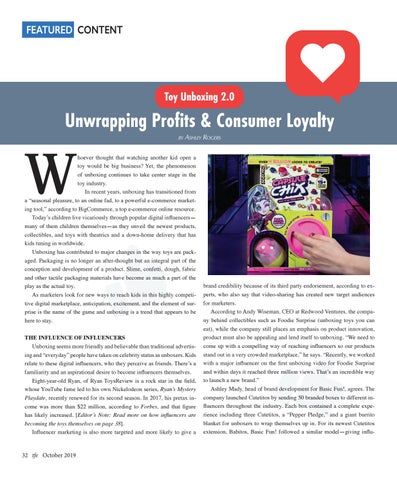 hoever thought that watching another kid open a toy would be big business? Yet, the phenomenon of unboxing continues to take center stage in the toy industry. In recent years, unboxing has transitioned from a “seasonal pleasure, to an online fad, to a powerful e-commerce marketing tool,” according to BigCommerce, a top e-commerce online resource. Today’s children live vicariously through popular digital inﬂuencers— many of them children themselves—as they unveil the newest products, collectibles, and toys with theatrics and a down-home delivery that has kids tuning in worldwide. Unboxing has contributed to major changes in the way toys are packaged. Packaging is no longer an after-thought but an integral part of the conception and development of a product. Slime, confetti, dough, fabric and other tactile packaging materials have become as much a part of the play as the actual toy. As marketers look for new ways to reach kids in this highly competitive digital marketplace, anticipation, excitement, and the element of surprise is the name of the game and unboxing is a trend that appears to be here to stay. THE INFLUENCE OF INFLUENCERS Unboxing seems more friendly and believable than traditional advertising and “everyday” people have taken on celebrity status as unboxers. Kids relate to these digital inﬂuencers, who they perceive as friends. There’s a familiarity and an aspirational desire to become inﬂuencers themselves. Eight-year-old Ryan, of Ryan ToysReview is a rock star in the ﬁeld, whose YouTube fame led to his own Nickelodeon series, Ryan’s Mystery Playdate, recently renewed for its second season. In 2017, his pretax income was more than $22 million, according to Forbes, and that ﬁgure has likely increased. [Editor’s Note: Read more on how inﬂuencers are becoming the toys themselves on page 38]. Inﬂuencer marketing is also more targeted and more likely to give a

brand credibility because of its third party endorsement, according to experts, who also say that video-sharing has created new target audiences for marketers. According to Andy Wiseman, CEO at Redwood Ventures, the company behind collectibles such as Foodie Surprise (unboxing toys you can eat), while the company still places an emphasis on product innovation, product must also be appealing and lend itself to unboxing. “We need to come up with a compelling way of reaching inﬂuencers so our products stand out in a very crowded marketplace,” he says. “Recently, we worked with a major inﬂuencer on the ﬁrst unboxing video for Foodie Surprise and within days it reached three million views. That’s an incredible way to launch a new brand.” Ashley Mady, head of brand development for Basic Fun!, agrees. The company launched Cutetitos by sending 50 branded boxes to different inﬂuencers throughout the industry. Each box contained a complete experience including three Cutetitos, a “Pepper Pledge,” and a giant burrito blanket for unboxers to wrap themselves up in. For its newest Cutetitos extension, Babitos, Basic Fun! followed a similar model—giving inﬂu-