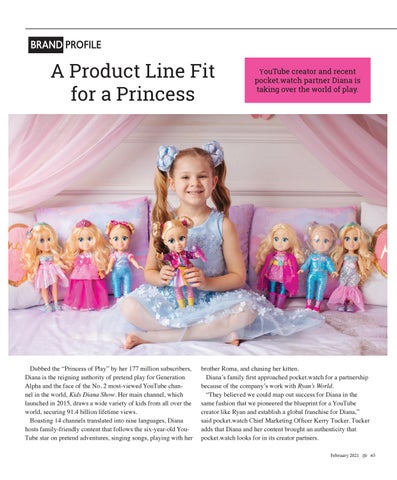 A Product Line Fit for a Princess

Dubbed the “Princess of Play” by her 177 million subscribers, Diana is the reigning authority of pretend play for Generation Alpha and the face of the No. 2 most-viewed YouTube channel in the world, Kids Diana Show. Her main channel, which launched in 2015, draws a wide variety of kids from all over the world, securing 91.4 billion lifetime views. Boasting 14 channels translated into nine languages, Diana hosts family-friendly content that follows the six-year-old YouTube star on pretend adventures, singing songs, playing with her

YouTube creator and recent pocket.watch partner Diana is taking over the world of play.

brother Roma, and chasing her kitten. Diana’s family first approached pocket.watch for a partnership because of the company’s work with Ryan’s World. “They believed we could map out success for Diana in the same fashion that we pioneered the blueprint for a YouTube creator like Ryan and establish a global franchise for Diana,” said pocket.watch Chief Marketing Officer Kerry Tucker. Tucker adds that Diana and her content brought an authenticity that pocket.watch looks for in its creator partners.