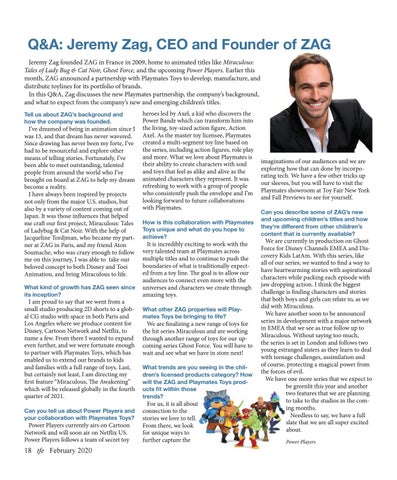 Q&amp;A: Jeremy Zag, CEO and Founder of ZAG Jeremy Zag founded ZAG in France in 2009, home to animated titles like Miraculous: Tales of Lady Bug &amp; Cat Noir, Ghost Force, and the upcoming Power Players. Earlier this month, ZAG announced a partnership with Playmates Toys to develop, manufacture, and distribute toylines for its portfolio of brands. In this Q&amp;A, Zag discusses the new Playmates partnership, the company’s background, and what to expect from the company’s new and emerging children’s titles. Tell us about ZAG’s background and how the company was founded.

I’ve dreamed of being in animation since I was 13, and that dream has never wavered. Since drawing has never been my forte, I’ve had to be resourceful and explore other means of telling stories. Fortunately, I’ve been able to meet outstanding, talented people from around the world who I’ve brought on board at ZAG to help my dream become a reality. I have always been inspired by projects not only from the major U.S. studios, but also by a variety of content coming out of Japan. It was those influences that helped me craft our first project, Miraculous: Tales of Ladybug &amp; Cat Noir. With the help of Jacqueline Tordjman, who became my partner at ZAG in Paris, and my friend Aton Soumache, who was crazy enough to follow me on this journey, I was able to take our beloved concept to both Disney and Toei Animation, and bring Miraculous to life. What kind of growth has ZAG seen since its inception?

I am proud to say that we went from a small studio producing 2D shorts to a global CG studio with space in both Paris and Los Angeles where we produce content for Disney, Cartoon Network and Netflix, to name a few. From there I wanted to expand even further, and we were fortunate enough to partner with Playmates Toys, which has enabled us to extend our brands to kids and families with a full range of toys. Last, but certainly not least, I am directing my first feature “Miraculous, The Awakening” which will be released globally in the fourth quarter of 2021. Can you tell us about Power Players and your collaboration with Playmates Toys?

Power Players currently airs on Cartoon Network and will soon air on Netflix US. Power Players follows a team of secret toy

heroes led by Axel, a kid who discovers the Power Bandz which can transform him into the living, toy-sized action figure, Action Axel. As the master toy licensee, Playmates created a multi-segment toy line based on the series, including action figures, role play and more. What we love about Playmates is their ability to create characters with soul and toys that feel as alike and alive as the animated characters they represent. It was refreshing to work with a group of people who consistently push the envelope and I’m looking forward to future collaborations with Playmates. How is this collaboration with Playmates Toys unique and what do you hope to achieve?

It is incredibly exciting to work with the very talented team at Playmates across multiple titles and to continue to push the boundaries of what is traditionally expected from a toy line. The goal is to allow our audiences to connect even more with the universes and characters we create through amazing toys. What other ZAG properties will Playmates Toys be bringing to life?

We are finalizing a new range of toys for the hit series Miraculous and are working through another range of toys for our upcoming series Ghost Force. You will have to wait and see what we have in store next! What trends are you seeing in the children’s licensed products category? How will the ZAG and Playmates Toys products fit within those trends?

For us, it is all about connection to the stories we love to tell. From there, we look for unique ways to further capture the

imaginations of our audiences and we are exploring how that can done by incorporating tech. We have a few other tricks up our sleeves, but you will have to visit the Playmates showroom at Toy Fair New York and Fall Previews to see for yourself. Can you describe some of ZAG’s new and upcoming children’s titles and how they’re different from other children’s content that is currently available?

We are currently in production on Ghost Force for Disney Channels EMEA and Discovery Kids LatAm. With this series, like all of our series, we wanted to find a way to have heartwarming stories with aspirational characters while packing each episode with jaw dropping action. I think the biggest challenge is finding characters and stories that both boys and girls can relate to, as we did with Miraculous. We have another soon to be announced series in development with a major network in EMEA that we see as true follow up to Miraculous. Without saying too much, the series is set in London and follows two young estranged sisters as they learn to deal with teenage challenges, assimilation and of course, protecting a magical power from the forces of evil. We have one more series that we expect to be greenlit this year and another two features that we are planning to take to the studios in the coming months. Needless to say, we have a full slate that we are all super excited about. Power Players