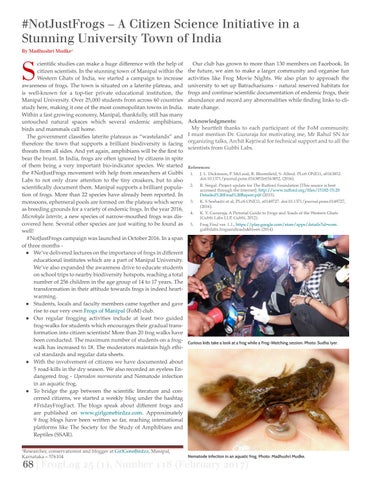 cientific studies can make a huge difference with the help of citizen scientists. In the stunning town of Manipal within the Western Ghats of India, we started a campaign to increase awareness of frogs. The town is situated on a laterite plateau, and is well-known for a top-tier private educational institution, the Manipal University. Over 25,000 students from across 60 countries study here, making it one of the most cosmopolitan towns in India. Within a fast growing economy, Manipal, thankfully, still has many untouched natural spaces which several endemic amphibians, birds and mammals call home. The government classifies laterite plateaus as “wastelands” and therefore the town that supports a brilliant biodiversity is facing threats from all sides. And yet again, amphibians will be the first to bear the brunt. In India, frogs are often ignored by citizens in spite of them being a very important bio-indicator species. We started the #NotJustFrogs movement with help from researchers at Gubbi Labs to not only draw attention to the tiny croakers, but to also scientifically document them. Manipal supports a brilliant population of frogs. More than 22 species have already been reported. In monsoons, ephemeral pools are formed on the plateau which serve as breeding grounds for a variety of endemic frogs. In the year 2016, Microhyla laterite, a new species of narrow-mouthed frogs was discovered here. Several other species are just waiting to be found as well! #NotJustFrogs campaign was launched in October 2016. In a span of three months ●● We’ve delivered lectures on the importance of frogs in different educational institutes which are a part of Manipal University. We’ve also expanded the awareness drive to educate students on school trips to nearby biodiversity hotspots, reaching a total number of 256 children in the age group of 14 to 17 years. The transformation in their attitude towards frogs is indeed heartwarming. ●● Students, locals and faculty members came together and gave rise to our very own Frogs of Manipal (FoM) club. ●● Our regular frogging activities include at least two guided frog-walks for students which encourages their gradual transformation into citizen scientists! More than 20 frog walks have been conducted. The maximum number of students on a frogwalk has increased to 18. The moderators maintain high ethical standards and regular data sheets. ●● With the involvement of citizens we have documented about 5 road-kills in the dry season. We also recorded an eyeless Endangered frog - Uperodon mormorata and Nematode infection in an aquatic frog. ●● To bridge the gap between the scientific literature and concerned citizens, we started a weekly blog under the hashtag #FridayFrogFact. The blogs speak about different frogs and are published on www.girlgonebirdzz.com. Approximately 9 frog blogs have been written so far, reaching international platforms like The Society for the Study of Amphibians and Reptiles (SSAR). Researcher, conservationist and blogger at GirlGoneBirdzz, Manipal, Karnataka – 576104

Our club has grown to more than 130 members on Facebook. In the future, we aim to make a larger community and organise fun activities like Frog Movie Nights. We also plan to approach the university to set up Batrachariums - natural reserved habitats for frogs and continue scientific documentation of endemic frogs, their abundance and record any abnormalities while finding links to climate change. Acknowledgments: My heartfelt thanks to each participant of the FoM community. I must mention Dr. Gururaja for motivating me, Mr Rahul SN for organizing talks, Archit Kejriwal for technical support and to all the scientists from Gubbi Labs. References: 1. 2. 3. 4. 5.

Curious kids take a look at a frog while a Frog-Watching session. Photo: Sudha Iyer. 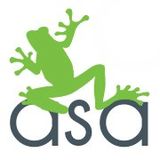