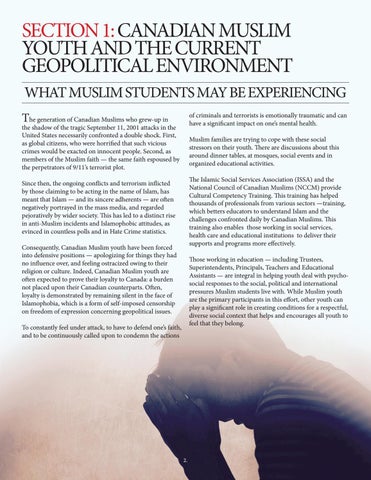 SECTION 1: CANADIAN MUSLIM YOUTH AND THE CURRENT GEOPOLITICAL ENVIRONMENT WHAT MUSLIM STUDENTS MAY BE EXPERIENCING The generation of Canadian Muslims who grew-up in

of criminals and terrorists is emotionally traumatic and can have a significant impact on one’s mental health.

the shadow of the tragic September 11, 2001 attacks in the United States necessarily confronted a double shock. First, as global citizens, who were horrified that such vicious crimes would be exacted on innocent people. Second, as members of the Muslim faith — the same faith espoused by the perpetrators of 9/11’s terrorist plot.

Muslim families are trying to cope with these social stressors on their youth. There are discussions about this around dinner tables, at mosques, social events and in organized educational activities. The Islamic Social Services Association (ISSA) and the National Council of Canadian Muslims (NCCM) provide Cultural Competency Training. This training has helped thousands of professionals from various sectors —training, which betters educators to understand Islam and the challenges confronted daily by Canadian Muslims. This training also enables those working in social services, health care and educational institutions to deliver their supports and programs more effectively.

Since then, the ongoing conflicts and terrorism inflicted by those claiming to be acting in the name of Islam, has meant that Islam — and its sincere adherents — are often negatively portrayed in the mass media, and regarded pejoratively by wider society. This has led to a distinct rise in anti-Muslim incidents and Islamophobic attitudes, as evinced in countless polls and in Hate Crime statistics. Consequently, Canadian Muslim youth have been forced into defensive positions — apologizing for things they had no influence over, and feeling ostracized owing to their religion or culture. Indeed, Canadian Muslim youth are often expected to prove their loyalty to Canada: a burden not placed upon their Canadian counterparts. Often, loyalty is demonstrated by remaining silent in the face of Islamophobia, which is a form of self-imposed censorship on freedom of expression concerning geopolitical issues.

Those working in education — including Trustees, Superintendents, Principals, Teachers and Educational Assistants — are integral in helping youth deal with psychosocial responses to the social, political and international pressures Muslim students live with. While Muslim youth are the primary participants in this effort, other youth can play a significant role in creating conditions for a respectful, diverse social context that helps and encourages all youth to feel that they belong.

To constantly feel under attack, to have to defend one’s faith, and to be continuously called upon to condemn the actions