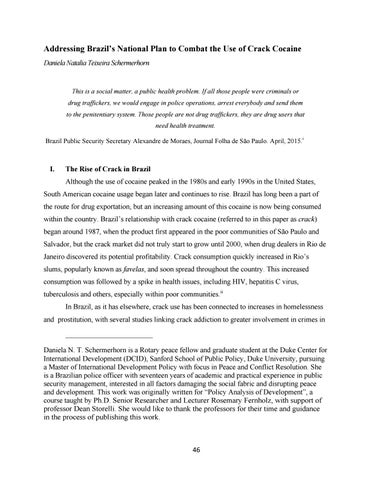 This is a social matter, a public health problem. If all those people were criminals or drug traffickers, we would engage in police operations, arrest everybody and send them to the penitentiary system. Those people are not drug traffickers, they are drug users that need health treatment. Brazil Public Security Secretary Alexandre de Moraes, Journal Folha de São Paulo. April, 2015.i

The Rise of Crack in Brazil Although the use of cocaine peaked in the 1980s and early 1990s in the United States,

South American cocaine usage began later and continues to rise. Brazil has long been a part of the route for drug exportation, but an increasing amount of this cocaine is now being consumed within the country. Brazil’s relationship with crack cocaine (referred to in this paper as crack) began around 1987, when the product first appeared in the poor communities of São Paulo and Salvador, but the crack market did not truly start to grow until 2000, when drug dealers in Rio de Janeiro discovered its potential profitability. Crack consumption quickly increased in Rio’s slums, popularly known as favelas, and soon spread throughout the country. This increased consumption was followed by a spike in health issues, including HIV, hepatitis C virus, tuberculosis and others, especially within poor communities.ii In Brazil, as it has elsewhere, crack use has been connected to increases in homelessness and prostitution, with several studies linking crack addiction to greater involvement in crimes in

Daniela N. T. Schermerhorn is a Rotary peace fellow and graduate student at the Duke Center for International Development (DCID), Sanford School of Public Policy, Duke University, pursuing a Master of International Development Policy with focus in Peace and Conflict Resolution. She is a Brazilian police officer with seventeen years of academic and practical experience in public security management, interested in all factors damaging the social fabric and disrupting peace and development. This work was originally written for “Policy Analysis of Development”, a course taught by Ph.D. Senior Researcher and Lecturer Rosemary Fernholz, with support of professor Dean Storelli. She would like to thank the professors for their time and guidance in the process of publishing this work.

The sixth edition of Américas, the Johns Hopkins Journal of Latin American Studies. 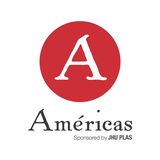