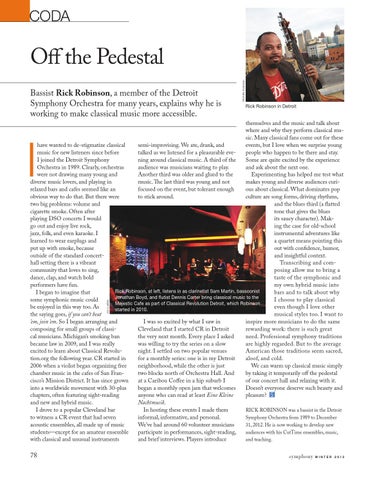 Bassist Rick Robinson, a member of the Detroit Symphony Orchestra for many years, explains why he is working to make classical music more accessible.

Off the Pedestal Rick Robinson in Detroit

themselves and the music and talk about where and why they perform classical music. Many classical fans come out for these events, but I love when we surprise young have wanted to de-stigmatize classical semi-improvising. We ate, drank, and people who happen to be there and stay. music for new listeners since before talked as we listened for a pleasurable eveSome are quite excited by the experience I joined the Detroit Symphony ning around classical music. A third of the and ask about the next one. Orchestra in 1989. Clearly, orchestras audience was musicians waiting to play. Experimenting has helped me test what were not drawing many young and Another third was older and glued to the makes young and diverse audiences curidiverse music lovers, and playing in music. The last third was young and not ous about classical. What dominates pop relaxed bars and cafes seemed like an focused on the event, but tolerant enough culture are song forms, driving rhythms, obvious way to do that. But there were to stick around. and the blues third (a flatted two big problems: volume and tone that gives the blues cigarette smoke. Often after its saucy character). Makplaying DSO concerts I would ing the case for old-school go out and enjoy live rock, instrumental adventures like jazz, folk, and even karaoke. I a quartet means pointing this learned to wear earplugs and out with confidence, humor, put up with smoke, because and insightful context. outside of the standard concertTranscribing and comhall setting there is a vibrant posing allow me to bring a community that loves to sing, taste of the symphonic and dance, clap, and watch bold my own hybrid music into performers have fun. Rick Robinson, at left, listens in as clarinetist Sam Martin, bassoonist bars and to talk about why I began to imagine that Jonathan Boyd, and flutist Dennis Carter bring classical music to the I choose to play classical some symphonic music could Majestic Cafe as part of Classical Revolution Detroit, which Robinson even though I love other be enjoyed in this way too. As started in 2010. musical styles too. I want to the saying goes, if you can’t beat inspire more musicians to do the same ’em, join ’em. So I began arranging and I was so excited by what I saw in rewarding work: there is such great composing for small groups of classiCleveland that I started CR in Detroit need. Professional symphony traditions cal musicians. Michigan’s smoking ban the very next month. Every place I asked are highly regarded. But to the average became law in 2009, and I was really was willing to try the series on a slow American those traditions seem sacred, excited to learn about Classical Revolunight. I settled on two popular venues aloof, and cold. tion.org the following year. CR started in for a monthly series: one is in my Detroit We can warm up classical music simply 2006 when a violist began organizing free neighborhood, while the other is just by taking it temporarily off the pedestal chamber music in the cafes of San Frantwo blocks north of Orchestra Hall. And of our concert hall and relaxing with it. cisco’s Mission District. It has since grown at a Caribou Coffee in a hip suburb I Doesn’t everyone deserve such beauty and into a worldwide movement with 30-plus began a monthly open jam that welcomes pleasure? chapters, often featuring sight-reading anyone who can read at least Eine Kleine and new and hybrid music. Nachtmusik. I drove to a popular Cleveland bar In hosting these events I made them RICK ROBINSON was a bassist in the Detroit to witness a CR event that had seven informal, informative, and personal. Symphony Orchestra from 1989 to December acoustic ensembles, all made up of music We’ve had around 60 volunteer musicians 31, 2012. He is now working to develop new students—except for an amateur ensemble participate in performances, sight-reading, audiences with his CutTime ensembles, music, with classical and unusual instruments and brief interviews. Players introduce and teaching. Jon Luebke