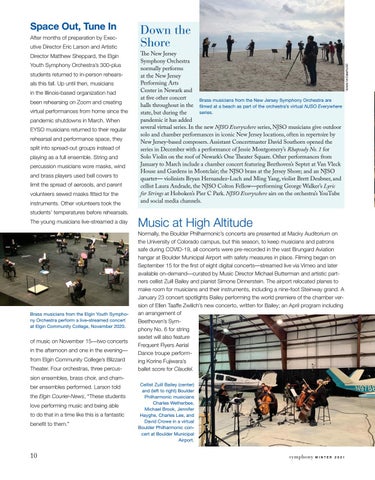 After months of preparation by Executive Director Eric Larson and Artistic Director Matthew Sheppard, the Elgin Youth Symphony Orchestra’s 300-plus students returned to in-person rehearsals this fall. Up until then, musicians in the Illinois-based organization had been rehearsing on Zoom and creating virtual performances from home since the pandemic shutdowns in March. When EYSO musicians returned to their regular rehearsal and performance space, they split into spread-out groups instead of playing as a full ensemble. String and percussion musicians wore masks, wind and brass players used bell covers to limit the spread of aerosols, and parent volunteers sewed masks fitted for the instruments. Other volunteers took the students’ temperatures before rehearsals. The young musicians live-streamed a day

of music on November 15—two concerts in the afternoon and one in the evening— from Elgin Community College’s Blizzard Theater. Four orchestras, three percus-

The New Jersey Symphony Orchestra normally performs at the New Jersey Performing Arts Center in Newark and at five other concert Brass musicians from the New Jersey Symphony Orchestra are halls throughout in the filmed at a beach as part of the orchestra’s virtual NJSO Everywhere series. state, but during the pandemic it has added several virtual series. In the new NJSO Everywhere series, NJSO musicians give outdoor solo and chamber performances in iconic New Jersey locations, often in repertoire by New Jersey-based composers. Assistant Concertmaster David Southorn opened the series in December with a performance of Jessie Montgomery’s Rhapsody No. 1 for Solo Violin on the roof of Newark’s One Theater Square. Other performances from January to March include a chamber concert featuring Beethoven’s Septet at Van Vleck House and Gardens in Montclair; the NJSO brass at the Jersey Shore; and an NJSO quartet— violinists Bryan Hernandez-Luch and Ming Yang, violist Brett Deubner, and cellist Laura Andrade, the NJSO Colton Fellow—performing George Walker’s Lyric for Strings at Hoboken’s Pier C Park. NJSO Everywhere airs on the orchestra’s YouTube and social media channels.

Music at High Altitude Normally, the Boulder Philharmonic’s concerts are presented at Macky Auditorium on the University of Colorado campus, but this season, to keep musicians and patrons safe during COVID-19, all concerts were pre-recorded in the vast Brungard Aviation hangar at Boulder Municipal Airport with safety measures in place. Filming began on September 15 for the first of eight digital concerts—streamed live via Vimeo and later available on-demand—curated by Music Director Michael Butterman and artistic partners cellist Zuill Bailey and pianist Simone Dinnerstein. The airport relocated planes to make room for musicians and their instruments, including a nine-foot Steinway grand. A January 23 concert spotlights Bailey performing the world premiere of the chamber version of Ellen Taaffe Zwilich’s new concerto, written for Bailey; an April program including an arrangement of Beethoven’s Symphony No. 6 for string sextet will also feature Frequent Flyers Aerial Dance troupe performing Korine Fujiwara’s ballet score for Claudel.

sion ensembles, brass choir, and chamber ensembles performed. Larson told the Elgin Courier-News, “These students love performing music and being able to do that in a time like this is a fantastic benefit to them.”

Space Out, Tune In