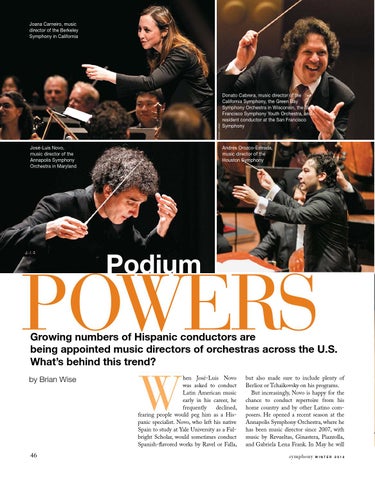 Joana Carneiro, music director of the Berkeley Symphony in California

Growing numbers of Hispanic conductors are being appointed music directors of orchestras across the U.S. What’s behind this trend?

hen José-Luis Novo was asked to conduct Latin American music early in his career, he frequently declined, fearing people would peg him as a Hispanic specialist. Novo, who left his native Spain to study at Yale University as a Fulbright Scholar, would sometimes conduct Spanish-flavored works by Ravel or Falla,

but also made sure to include plenty of Berlioz or Tchaikovsky on his programs. But increasingly, Novo is happy for the chance to conduct repertoire from his home country and by other Latino composers. He opened a recent season at the Annapolis Symphony Orchestra, where he has been music director since 2007, with music by Revueltas, Ginastera, Piazzolla, and Gabriela Lena Frank. In May he will symphony