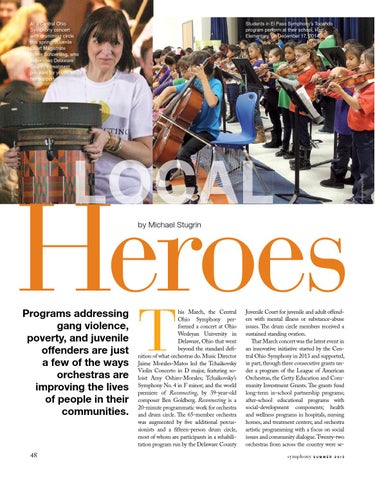 Programs addressing gang violence, poverty, and juvenile offenders are just a few of the ways orchestras are improving the lives of people in their communities.

his March, the Central Ohio Symphony performed a concert at Ohio Wesleyan University in Delaware, Ohio that went beyond the standard definition of what orchestras do. Music Director Jaime Morales-Matos led the Tchaikovsky Violin Concerto in D major, featuring soloist Amy Oshiro-Morales; Tchaikovsky’s Symphony No. 4 in F minor; and the world premiere of Reconnecting, by 39-year-old composer Ben Goldberg. Reconnecting is a 20-minute programmatic work for orchestra and drum circle. The 65-member orchestra was augmented by five additional percussionists and a fifteen-person drum circle, most of whom are participants in a rehabilitation program run by the Delaware County

Juvenile Court for juvenile and adult offenders with mental illness or substance-abuse issues. The drum circle members received a sustained standing ovation. That March concert was the latest event in an innovative initiative started by the Central Ohio Symphony in 2013 and supported, in part, through three consecutive grants under a program of the League of American Orchestras, the Getty Education and Community Investment Grants. The grants fund long-term in-school partnership programs; after-school educational programs with social-development components; health and wellness programs in hospitals, nursing homes, and treatment centers; and orchestra artistic programming with a focus on social issues and community dialogue. Twenty-two orchestras from across the country were sesymphony