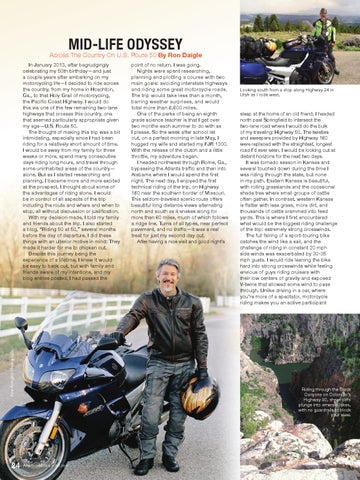 Across The Country On U.S. Route 50 By Ron Daigle

In January 2013, after begrudgingly celebrating my 50th birthday—and just a couple years after embarking on my motorcycling life—I decided to ride across the country, from my home in Hoschton, Ga., to that Holy Grail of motorcycling, the Paciﬁc Coast Highway. I would do this via one of the few remaining two-lane highways that crosses this country, one that seemed particularly appropriate given my age—U.S. Route 50. The thought of making this trip was a bit intimidating, especially since I had been riding for a relatively short amount of time. I would be away from my family for three weeks or more, spend many consecutive days riding long hours, and travel through some uninhabited areas of the country— alone. But as I started researching and planning, I became more and more excited at the prospect. I thought about some of the advantages of riding alone. I would be in control of all aspects of the trip including the route and where and when to stop, all without discussion or justiﬁcation. With my decision made, I told my family and friends about the trip. I also started a blog, “Riding 50 at 50,” several months before the day of departure. I did these things with an ulterior motive in mind: They made it harder for me to chicken out. Despite this journey being the experience of a lifetime, I knew it would be easy to back out, but with family and friends aware of my intentions, and my blog entries posted, I had passed the

point of no return. I was going. Nights were spent researching, planning and plotting a course with two main goals: avoiding interstate highways and riding some great motorcycle roads. The trip would take less than a month, barring weather surprises, and would total more than 6,600 miles. One of the perks of being an eighth grade science teacher is that I get over two months each summer to do with as I please. So the week after school let out, on a perfect morning in late May, I hugged my wife and started my FJR 1300. With the release of the clutch and a little throttle, my adventure began. I headed northwest through Rome, Ga., bypassing the Atlanta traﬃc and then into Alabama where I would spend the ﬁrst night. The next day, I enjoyed the ﬁrst technical riding of the trip, on Highway 160 near the southern border of Missouri. This seldom-traveled scenic route oﬀers beautiful long distance views alternating north and south as it snakes along for more than 60 miles, much of which follows a ridge line. Turns of all types, near perfect pavement, and no traﬃc—it was a real treat for just my second day out. After having a nice visit and good night’s

Looking south from a stop along Highway 24 in Utah as I rode west.

sleep at the home of an old friend, I headed north past Springﬁeld to intersect the two-lane road where I would do the bulk of my traveling: Highway 50. The twisties and sweepers provided by Highway 160 were replaced with the straightest, longest road I’d ever seen. I would be looking out at distant horizons for the next two days. It was tornado season in Kansas and several touched down during the time I was riding through the state, but none in my path. Eastern Kansas is beautiful, with rolling grasslands and the occasional shade tree where small groups of cattle often gather. In contrast, western Kansas is ﬂatter with less grass, more dirt, and thousands of cattle crammed into feed yards. This is where I ﬁrst encountered what would be the biggest riding challenge of the trip: extremely strong crosswinds. The full fairing of a sport-touring bike catches the wind like a sail, and the challenge of riding in constant 20 mph side winds was exacerbated by 30-35 mph gusts. I would ride leaning the bike hard into strong crosswinds while feeling envious of guys riding cruisers with their low centers of gravity and exposed V-twins that allowed some wind to pass through. Unlike driving in a car, where you’re more of a spectator, motorcycle riding makes you an active participant

Riding through the Black Canyons on Colorado’s Highway 92, sheer cliﬀs plunge into emerald lakes, with no guardrails to block your view.

The Journal of the AMA. 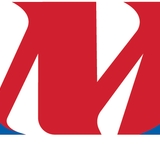