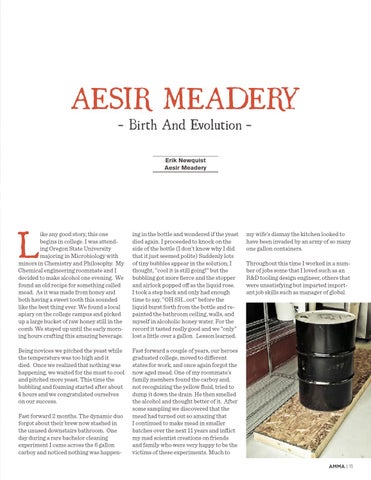 ike any good story, this one begins in college. I was attending Oregon State University majoring in Microbiology with minors in Chemistry and Philosophy. My Chemical engineering roommate and I decided to make alcohol one evening. We found an old recipe for something called mead. As it was made from honey and both having a sweet tooth this sounded like the best thing ever. We found a local apiary on the college campus and picked up a large bucket of raw honey still in the comb. We stayed up until the early morning hours crafting this amazing beverage.

ing in the bottle and wondered if the yeast died again. I proceeded to knock on the side of the bottle (I don’t know why I did that it just seemed polite) Suddenly lots of tiny bubbles appear in the solution; I thought, “cool it is still going!” but the bubbling got more fierce and the stopper and airlock popped off as the liquid rose. I took a step back and only had enough time to say, “OH SH…oot” before the liquid burst forth from the bottle and repainted the bathroom ceiling, walls, and myself in alcoholic honey water. For the record it tasted really good and we “only” lost a little over a gallon. Lesson learned.

Being novices we pitched the yeast while the temperature was too high and it died. Once we realized that nothing was happening, we waited for the must to cool and pitched more yeast. This time the bubbling and foaming started after about 4 hours and we congratulated ourselves on our success.

Fast forward a couple of years, our heroes graduated college, moved to different states for work, and once again forgot the now aged mead. One of my roommate’s family members found the carboy and, not recognizing the yellow fluid, tried to dump it down the drain. He then smelled the alcohol and thought better of it. After some sampling we discovered that the mead had turned out so amazing that I continued to make mead in smaller batches over the next 11 years and inflict my mad scientist creations on friends and family who were very happy to be the victims of these experiments. Much to

Fast forward 2 months. The dynamic duo forgot about their brew now stashed in the unused downstairs bathroom. One day during a rare bachelor cleaning experiment I came across the 6 gallon carboy and noticed nothing was happen-

my wife’s dismay the kitchen looked to have been invaded by an army of so many one gallon containers. Throughout this time I worked in a number of jobs some that I loved such as an R&amp;D tooling design engineer, others that were unsatisfying but imparted important job skills such as manager of global

The Journal of the American Mead Makers Association 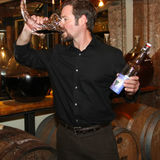