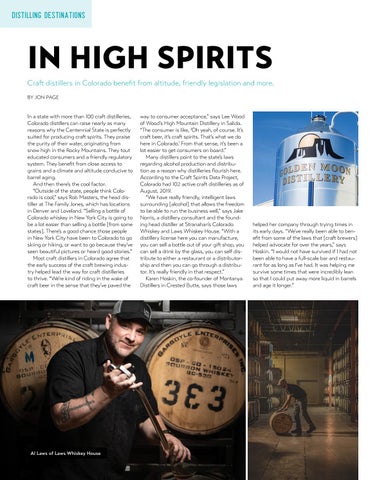 In a state with more than 100 craft distilleries, Colorado distillers can raise nearly as many reasons why the Centennial State is perfectly suited for producing craft spirits. They praise the purity of their water, originating from snow high in the Rocky Mountains. They tout educated consumers and a friendly regulatory system. They benefit from close access to grains and a climate and altitude conducive to barrel aging. And then there’s the cool factor. “Outside of the state, people think Colorado is cool,” says Rob Masters, the head distiller at The Family Jones, which has locations in Denver and Loveland. “Selling a bottle of Colorado whiskey in New York City is going to be a lot easier than selling a bottle [from some states]. There’s a good chance those people in New York City have been to Colorado to go skiing or hiking, or want to go because they’ve seen beautiful pictures or heard good stories.” Most craft distillers in Colorado agree that the early success of the craft brewing industry helped lead the way for craft distilleries to thrive. “We’re kind of riding in the wake of craft beer in the sense that they’ve paved the

way to consumer acceptance,” says Lee Wood of Wood’s High Mountain Distillery in Salida. “The consumer is like, ‘Oh yeah, of course. It’s craft beer, it’s craft spirits. That’s what we do here in Colorado.’ From that sense, it’s been a lot easier to get consumers on board.” Many distillers point to the state’s laws regarding alcohol production and distribution as a reason why distilleries flourish here. According to the Craft Spirits Data Project, Colorado had 102 active craft distilleries as of August, 2019. “We have really friendly, intelligent laws surrounding [alcohol] that allows the freedom to be able to run the business well,” says Jake Norris, a distillery consultant and the founding head distiller at Stranahan’s Colorado Whiskey and Laws Whiskey House. “With a distillery license here you can manufacture, you can sell a bottle out of your gift shop, you can sell a drink by the glass, you can self distribute to either a restaurant or a distributorship and then you can go through a distributor. It’s really friendly in that respect.” Karen Hoskin, the co-founder of Montanya Distillers in Crested Butte, says those laws

helped her company through trying times in its early days. “We’ve really been able to benefit from some of the laws that [craft brewers] helped advocate for over the years,” says Hoskin. “I would not have survived if I had not been able to have a full-scale bar and restaurant for as long as I’ve had. It was helping me survive some times that were incredibly lean so that I could put away more liquid in barrels and age it longer.”