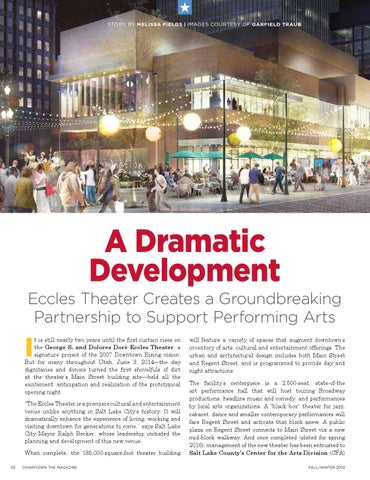 t is still nearly two years until the first curtain rises on the George S. and Dolores Doré Eccles Theater, a signature project of the 2007 Downtown Rising vision. But for many throughout Utah, June 3, 2014—the day dignitaries and donors turned the first shovelfuls of dirt at the theater’s Main Street building site—held all the excitement, anticipation and realization of the prototypical opening night. “The Eccles Theater is a premiere cultural and entertainment venue unlike anything in Salt Lake City’s history. It will dramatically enhance the experience of living, working and visiting downtown for generations to come,” says Salt Lake City Mayor Ralph Becker, whose leadership initiated the planning and development of this new venue. When complete, the 185,000-square-foot theater building

will feature a variety of spaces that augment downtown’s inventory of arts, cultural and entertainment offerings. The urban and architectural design includes both Main Street and Regent Street, and is programmed to provide day and night attractions. The facility’s centerpiece is a 2,500-seat, state-of-the art performance hall that will host touring Broadway productions, headline music and comedy, and performances by local arts organizations. A “black box” theater for jazz, cabaret, dance and smaller contemporary performances will face Regent Street and activate that block anew. A public plaza on Regent Street connects to Main Street via a new mid-block walkway. And once completed (slated for spring 2016), management of the new theater has been entrusted to Salt Lake County’s Center for the Arts Division (CFA) fall / winter 2014