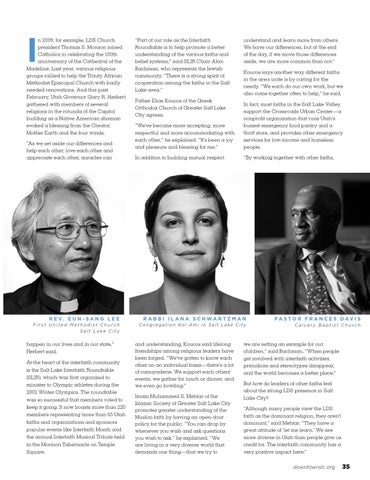 n 2009, for example, LDS Church president Thomas S. Monson joined Catholics in celebrating the 100th anniversary of the Cathedral of the Madeline. Last year, various religious groups rallied to help the Trinity African Methodist Episcopal Church with badly needed renovations. And this past February, Utah Governor Gary R. Herbert gathered with members of several religions in the rotunda of the Capitol building as a Native American shaman evoked a blessing from the Creator, Mother Earth and the four winds. “As we set aside our differences and help each other, love each other and appreciate each other, miracles can

“Part of our role as the Interfaith Roundtable is to help promote a better understanding of the various faiths and belief systems,” said SLIR Chair Alan Bachman, who represents the Jewish community. “There is a strong spirit of cooperation among the faiths in the Salt Lake area.” Father Elias Koucos of the Greek Orthodox Church of Greater Salt Lake City agrees.

understand and learn more from others. We have our differences, but at the end of the day, if we move those differences aside, we are more common than not.” Koucos says another way different faiths in the area unite is by caring for the needy. “We each do our own work, but we also come together often to help,” he said.

“We’ve become more accepting, more respectful and more accommodating with each other,” he explained. “It’s been a joy and pleasure and blessing for me.”

In fact, most faiths in the Salt Lake Valley support the Crossroads Urban Center—a nonprofit organization that runs Utah’s busiest emergency food pantry and a thrift store, and provides other emergency services for low-income and homeless people.

In addition to building mutual respect

“By working together with other faiths,

happen in our lives and in our state,” Herbert said. At the heart of the interfaith community is the Salt Lake Interfaith Roundtable (SLIR), which was first organized to minister to Olympic athletes during the 2002 Winter Olympics. The roundtable was so successful that members voted to keep it going. It now boasts more than 220 members representing more than 65 Utah faiths and organizations and sponsors popular events like Interfaith Month and the annual Interfaith Musical Tribute held in the Mormon Tabernacle on Temple Square.

and understanding, Koucos said lifelong friendships among religious leaders have been forged. “We’ve gotten to know each other on an individual basis—there’s a lot of camaraderie. We support each others’ events, we gather for lunch or dinner, and we even go bowling.” Imam Muhammed S. Mehtar of the Islamic Society of Greater Salt Lake City promotes greater understanding of the Muslim faith by having an open-door policy for the public. “You can drop by whenever you wish and ask questions you wish to ask,” he explained. “We are living in a very diverse world that demands one thing—that we try to

we are setting an example for our children,” said Bachman. “When people get involved with interfaith activities, prejudices and stereotypes disappear, and the world becomes a better place.” But how do leaders of other faiths feel about the strong LDS presence in Salt Lake City? “Although many people view the LDS faith as the dominant religion, they aren’t dominant,” said Mehtar. “They have a great attitude of ‘let me learn.’ We are more diverse in Utah than people give us credit for. The interfaith community has a very positive impact here.” downtownslc.org