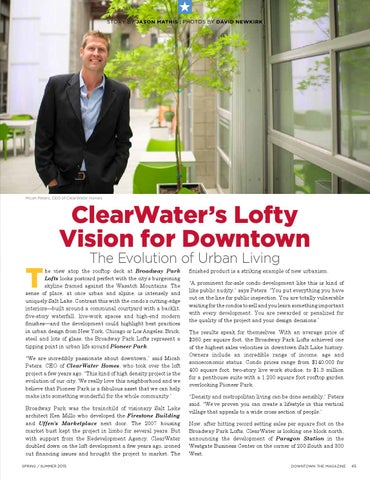 ClearWater’s Lofty Vision for Downtown The Evolution of Urban Living

he view atop the rooftop deck at Broadway Park Lofts looks postcard perfect with the city’s burgeoning skyline framed against the Wasatch Mountains. The sense of place, at once urban and alpine, is intensely and uniquely Salt Lake. Contrast this with the condo’s cutting-edge interiors—built around a communal courtyard with a backlit, five-story waterfall, live-work spaces and high-end modern finishes—and the development could highlight best practices in urban design from New York, Chicago or Los Angeles. Brick, steel and lots of glass, the Broadway Park Lofts represent a tipping point in urban life around Pioneer Park. “We are incredibly passionate about downtown,” said Micah Peters, CEO of ClearWater Homes, who took over the loft project a few years ago. “This kind of high density project is the evolution of our city. We really love this neighborhood and we believe that Pioneer Park is a fabulous asset that we can help make into something wonderful for the whole community.” Broadway Park was the brainchild of visionary Salt Lake architect Ken Millo who developed the Firestone Building and Uffen’s Marketplace next door. The 2007 housing market bust kept the project in limbo for several years. But with support from the Redevelopment Agency, ClearWater doubled down on the loft development a few years ago, ironed out financing issues and brought the project to market. The spring / summer 2015

finished product is a striking example of new urbanism. “A prominent for-sale condo development like this is kind of like public nudity,” says Peters. “You put everything you have out on the line for public inspection. You are totally vulnerable waiting for the condos to sell and you learn something important with every development. You are rewarded or penalized for the quality of the project and your design decisions.” The results speak for themselves. With an average price of $360 per square foot, the Broadway Park Lofts achieved one of the highest sales velocities in downtown Salt Lake history. Owners include an incredible range of income, age and socioeconomic status. Condo prices range from $140,000 for 400 square foot, two-story live work studios, to $1.3 million for a penthouse suite with a 1,200 square foot rooftop garden overlooking Pioneer Park. “Density and metropolitan living can be done sensibly,” Peters said. “We’ve proven you can create a lifestyle in this vertical village that appeals to a wide cross section of people.” Now, after hitting record setting sales per square foot on the Broadway Park Lofts, ClearWater is looking one block north, announcing the development of Paragon Station in the Westgate Business Center on the corner of 200 South and 300 West. downtown the magazine