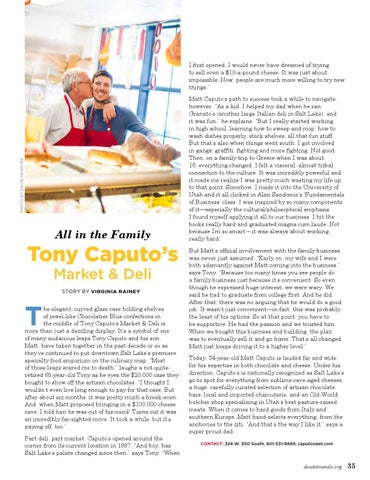 I first opened, I would never have dreamed of trying to sell even a $10-a-pound cheese. It was just about impossible. Now, people are much more willing to try new things.”

All in the Family

he elegant, curved glass case holding shelves of jewel-like Chocolatier Blue confections in the middle of Tony Caputo’s Market & Deli is more than just a dazzling display. It’s a symbol of one of many audacious leaps Tony Caputo and his son, Matt, have taken together in the past decade or so as they’ve continued to put downtown Salt Lake’s premiere specialty food emporium on the culinary map. “Most of those leaps scared me to death,” laughs a not-quiteretired 65-year-old Tony as he eyes the $20,000 case they bought to show off the artisan chocolates. “I thought I wouldn’t even live long enough to pay for that case. But after about six months, it was pretty much a break-even. And, when Matt proposed bringing in a $100,000 cheese cave, I told him he was out of his mind! Turns out it was an incredibly far-sighted move. It took a while, but it’s paying off, too.” Part deli, part market, Caputo’s opened around the corner from its current location in 1997. “And boy, has Salt Lake’s palate changed since then,” says Tony. “When

Matt Caputo’s path to success took a while to navigate, however. “As a kid, I helped my dad when he ran Granato’s (another large Italian deli in Salt Lake), and it was fun,” he explains. “But I really started working in high school, learning how to sweep and mop, how to wash dishes properly, stock shelves, all that fun stuff. But that’s also when things went south. I got involved in gangs, graffiti, fighting and more fighting. Not good. Then, on a family trip to Greece when I was about 16, everything changed. I felt a visceral, almost tribal connection to the culture. It was incredibly powerful and it made me realize I was pretty much wasting my life up to that point. Somehow, I made it into the University of Utah and it all clicked in Alan Sandomir’s ‘Fundamentals of Business’ class. I was inspired by so many components of it—especially the cultural/philosophical emphasis. I found myself applying it all to our business. I hit the books really hard and graduated magna cum laude. Not because I’m so smart – it was always about working really hard.” But Matt’s official involvement with the family business was never just assumed. “Early on, my wife and I were both adamantly against Matt coming into the business,” says Tony. “Because too many times you see people do a family business just because it’s convenient. So even though he expressed huge interest, we were wary. We said he had to graduate from college first. And he did. After that, there was no arguing that he would do a good job. It wasn’t just convenient—in fact, this was probably the least of his options. So at that point, you have to be supportive. He had the passion and we trusted him. When we bought this business and building, the plan was to eventually sell it and go home. That’s all changed. Matt just keeps driving it to a higher level.” Today, 34-year-old Matt Caputo is lauded far and wide for his expertise in both chocolate and cheese. Under his direction, Caputo’s is nationally recognized as Salt Lake’s go-to spot for everything from sublime cave-aged cheeses, a huge, carefully curated selection of artisan chocolate bars, local and imported charcuterie, and an Old-World butcher shop specializing in Utah’s best pasture-raised meats. When it comes to hard goods from Italy and southern Europe, Matt hand-selects everything, from the anchovies to the ziti. “And that’s the way I like it,” says a super proud dad. CONTACT: 324 W. 300 South, 801-531-8669, caputosdeli.com