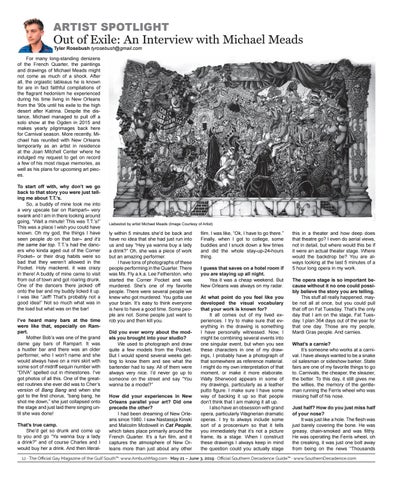 Out of Exile: An Interview with Michael Meads Tyler Rosebush tyrosebush@gmail.com

For many long-standing denizens of the French Quarter, the paintings and drawings of Michael Meads might not come as much of a shock. After all, the orgiastic tableaus he is known for are in fact faithful compilations of the flagrant hedonism he experienced during his time living in New Orleans from the ’90s until his exile to the high desert after Katrina. Despite the distance, Michael managed to pull off a solo show at the Ogden in 2015 and makes yearly pilgrimages back here for Carnival season. More recently, Michael has reunited with New Orleans temporarily as an artist in residence at the Joan Mitchell Center where he indulged my request to get on record a few of his most risque memories, as well as his plans for upcoming art pieces. To start off with, why don’t we go back to that story you were just telling me about T.T.’s. So, a buddy of mine took me into a very upscale bar on Rampart– very swank and I am in there looking around going, “Wait a minute! This was T.T.’s!” This was a place I wish you could have known. Oh my god, the things I have seen people do on that bar– and it’s the same bar top. T.T.’s had the dancers who kinda aged out of the Corner Pocket– or their drug habits were so bad that they weren’t allowed in the Pocket. Holy mackerel, it was crazy in there! A buddy of mine came to visit from out of town and got roaring drunk. One of the dancers there jacked off onto the bar and my buddy licked it up. I was like “Jeff! That’s probably not a good idea!” Not so much what was in the load but what was on the bar! I’ve heard many bars at the time were like that, especially on Rampart. Mother Bob’s was one of the grand dame gay bars of Rampart. It was a hustler bar and there was an older performer, who I won’t name and she would always have on a mini skirt with some sort of midriff sequin number with “DIVA” spelled out in rhinestones. I’ve got photos of all this. One of the greatest routines she ever did was to Cher’s version of Bang Bang and when she got to the first chorus, “bang bang, he shot me down,” she just collapsed onto the stage and just laid there singing until she was done! That’s true camp. She’d get so drunk and come up to you and go “Ya wanna buy a lady a drink?” and of course Charles and I would buy her a drink. And then literal-

ly within 5 minutes she’d be back and have no idea that she had just run into us and say “Hey ya wanna buy a lady a drink?” Oh, she was a piece of work but an amazing performer. I have tons of photographs of these people performing in the Quarter. There was Ms. Fly a.k.a. Lee Fetherston, who started the Corner Pocket and was murdered. She’s one of my favorite people. There were several people we knew who got murdered. You gotta use your brain. It’s easy to think everyone is here to have a good time. Some people are not. Some people just want to rob you and then kill you. Did you ever worry about the models you brought into your studio? We used to photograph and draw quite a few models from the Pocket. But I would spend several weeks getting to know them and see what the bartender had to say. All of them were always very nice. I’d never go up to someone on the street and say “You wanna be a model?” How did your experiences in New Orleans parallel your art? Did one precede the other? I had been dreaming of New Orleans since 1980. I saw Nastassja Kinski and Malcolm Mcdowell in Cat People, which takes place primarily around the French Quarter. It’s a fun film, and it captures the atmosphere of New Orleans more than just about any other

film. I was like, “Ok, I have to go there.” Finally, when I got to college, some buddies and I snuck down a few times and did the whole stay-up-24-hours thing. I guess that saves on a hotel room if you are staying up all night. Yea it was a cheap weekend. But New Orleans was always on my radar. At what point do you feel like you developed the visual vocabulary that your work is known for? It all comes out of my lived experiences. I try to make sure that everything in the drawing is something I have personally witnessed. Now, I might be combining several events into one singular event, but when you see these characters in one of my drawings, I probably have a photograph of that somewhere as reference material. I might do my own interpretation of that moment, or make it more elaborate. Wally Sherwood appears in some of my drawings, particularly as a leather putto figure. I make sure I have some way of backing it up so that people don’t think that I am making it all up. I also have an obsession with grand opera, particularly Wagnerian dramatic operas. I try to always include some sort of a proscenium so that it tells you immediately that it’s not a picture frame, its a stage. When I construct these drawings I always keep in mind the question could you actually stage

this in a theater and how deep does that theatre go? I even do aerial views, not in detail, but where would this be if it were an actual theater stage. Where would the backdrop be? You are always looking at the last 5 minutes of a 5 hour long opera in my work. The opera stage is so important because without it no one could possibly believe the story you are telling. This stuff all really happened, maybe not all at once, but you could pull that off on Fat Tuesday. That’s the only day that I am on the stage, Fat Tuesday. I plan 364 days out of the year for that one day. Those are my people, Mardi Gras people. And carnies. What’s a carnie? It’s someone who works at a carnival. I have always wanted to be a snake oil salesman or sideshow barker. State fairs are one of my favorite things to go to. Carnivals, the cheaper, the sleazier, the better. To this day, it still gives me the willies, the memory of the gentleman running the Ferris wheel who was missing half of his nose. Just half? How do you just miss half of your nose? It was just like a hole. The flesh was just barely covering the bone. He was greasy, chain-smoked and was filthy. He was operating the Ferris wheel, oh the creaking, it was just one bolt away from being on the news “Thousands 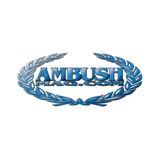