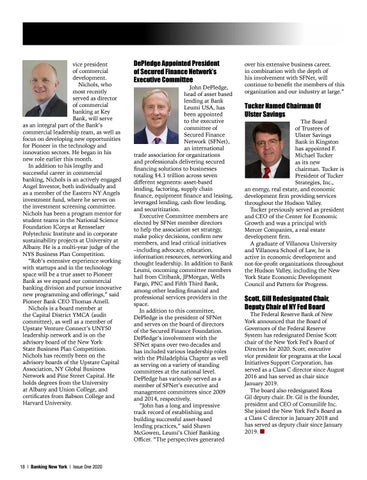 vice president of commercial development. Nichols, who most recently served as director of commercial banking at Key Bank, will serve as an integral part of the Bank’s commercial leadership team, as well as focus on developing new opportunities for Pioneer in the technology and innovation sectors. He began in his new role earlier this month. In addition to his lengthy and successful career in commercial banking, Nichols is an actively engaged Angel Investor, both individually and as a member of the Eastern NY Angels investment fund, where he serves on the investment screening committee. Nichols has been a program mentor for student teams in the National Science Foundation ICorps at Rensselaer Polytechnic Institute and in corporate sustainability projects at University at Albany. He is a multi-year judge of the NYS Business Plan Competition. “Rob’s extensive experience working with startups and in the technology space will be a true asset to Pioneer Bank as we expand our commercial banking division and pursue innovative new programming and offerings,” said Pioneer Bank CEO Thomas Amell. Nichols is a board member at the Capital District YMCA (audit committee), as well as a member of Upstate Venture Connect’s UNY50 leadership network and is on the advisory board of the New York State Business Plan Competition. Nichols has recently been on the advisory boards of the Upstate Capital Association, NY Global Business Network and Pine Street Capital. He holds degrees from the University at Albany and Union College, and certificates from Babson College and Harvard University.

John DePledge, head of asset based lending at Bank Leumi USA, has been appointed to the executive committee of Secured Finance Network (SFNet), an international trade association for organizations and professionals delivering secured financing solutions to businesses totaling $4.1 trillion across seven different segments: asset-based lending, factoring, supply chain finance, equipment finance and leasing, leveraged lending, cash flow lending, and securitization. Executive Committee members are elected by SFNet member directors to help the association set strategy, make policy decisions, confirm new members, and lead critical initiatives –including advocacy, education, information resources, networking and thought leadership. In addition to Bank Leumi, oncoming committee members hail from Citibank, JPMorgan, Wells Fargo, PNC and Fifth Third Bank, among other leading financial and professional services providers in the space. In addition to this committee, DePledge is the president of SFNet and serves on the board of directors of the Secured Finance Foundation. DePledge’s involvement with the SFNet spans over two decades and has included various leadership roles with the Philadelphia Chapter as well as serving on a variety of standing committees at the national level. DePledge has variously served as a member of SFNet’s executive and management committees since 2009 and 2014, respectively. “John has a long and impressive track record of establishing and building successful asset-based lending practices,” said Shawn McGowen, Leumi’s Chief Banking Officer. “The perspectives generated

over his extensive business career, in combination with the depth of his involvement with SFNet, will continue to benefit the members of this organization and our industry at large.”

The Board of Trustees of Ulster Savings Bank in Kingston has appointed F. Michael Tucker as its new chairman. Tucker is President of Tucker Strategies, Inc., an energy, real estate, and economic development firm providing services throughout the Hudson Valley. Tucker previously served as president and CEO of the Center for Economic Growth and was a principal with Mercer Companies, a real estate development firm. A graduate of Villanova University and Villanova School of Law, he is active in economic development and not-for-profit organizations throughout the Hudson Valley, including the New York State Economic Development Council and Pattern for Progress.

The Federal Reserve Bank of New York announced that the Board of Governors of the Federal Reserve System has redesignated Denise Scott chair of the New York Fed’s Board of Directors for 2020. Scott, executive vice president for programs at the Local Initiatives Support Corporation, has served as a Class C director since August 2016 and has served as chair since January 2019. The board also redesignated Rosa Gil deputy chair. Dr. Gil is the founder, president and CEO of Comunilife Inc. She joined the New York Fed’s Board as a Class C director in January 2018 and has served as deputy chair since January 2019. ■

Banking New York takes a view ahead to the challenges from bank consolidation, as well as what the New York legislature and governor have in mind. Banking technology is the special focus of this issue as we explore Martech, Cybersecurity, Digital Branches, and so much more. 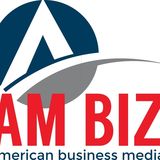