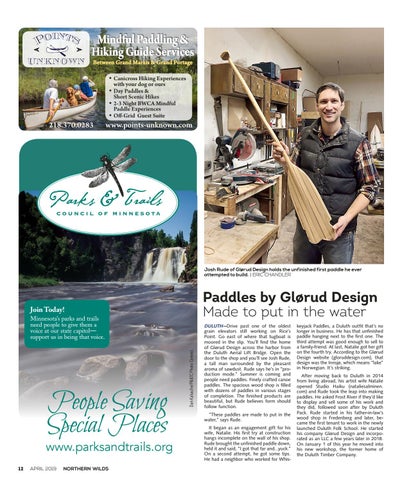 Paddles by Glørud Design Made to put in the water

Minnesota’s parks and trails need people to give them a voice at our state capitol— support us in being that voice.

DULUTH— Drive past one of the oldest grain elevators still working on Rice’s Point. Go east of where that tugboat is moored in the slip. You’ll find the home of Glørud Design across the harbor from the Duluth Aerial Lift Bridge. Open the door to the shop and you’ll see Josh Rude, a tall man surrounded by the pleasant aroma of sawdust. Rude says he’s in “production mode.” Summer is coming and people need paddles. Finely crafted canoe paddles. The spacious wood shop is filled with dozens of paddles in various stages of completion. The finished products are beautiful, but Rude believes form should follow function. “These paddles are made to put in the water,” says Rude. It began as an engagement gift for his wife, Natalie. His first try at construction hangs incomplete on the wall of his shop. Rude brought the unfinished paddle down, held it and said, “I got that far and...yuck.” On a second attempt, he got some tips. He had a neighbor who worked for Whis-

keyjack Paddles, a Duluth outfit that’s no longer in business. He has that unfinished paddle hanging next to the first one. The third attempt was good enough to sell to a family-friend. At last, Natalie got her gift on the fourth try. According to the Glørud Design website (gloruddesign.com), that design was the Innsjø, which means “lake” in Norwegian. It’s striking. After moving back to Duluth in 2014 from living abroad, his artist wife Natalie opened Studio Haiku (nataliesalminen. com) and Rude took the leap into making paddles. He asked Frost River if they’d like to display and sell some of his work and they did, followed soon after by Duluth Pack. Rude started in his father-in-law’s wood shop in Fredenberg and later, became the first tenant to work in the newly launched Duluth Folk School. He started his company Glørud Design and incorporated as an LLC a few years later in 2018. On January 1 of this year he moved into his new workshop, the former home of the Duluth Timber Company.

In this issue, we explore the world of canoes, as well as the people who make and use them. Stories include a woman who makes canoes in Atikokan, a paddle-maker in Duluth, the specialized world of canoeing cuisine, and canoe-themed artwork from the Thunder Bay Art Gallery’s permanent collection. Other stories include beekeeping, shed hunting, and the life of Nipigon angler and conservationist Ray Dupuis. Enjoy! 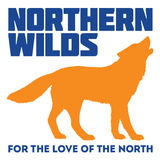