"Photos from the OSU vs. Michigan Game" 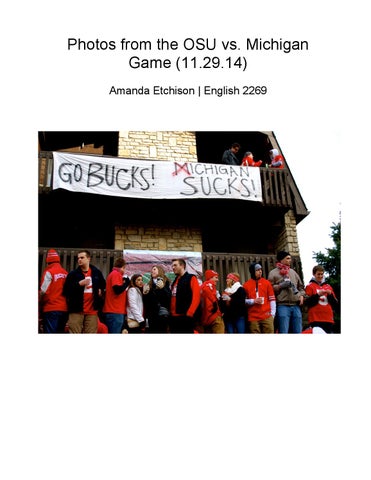 Fans line up to watch the Ohio State and Michigan football teams enter Ohio Stadium prior to the OSU vs. Michigan game on Nov. 29. Photo credit: Amanda Etchison

Ohio State fans take photos and reach out for high fives as members of the football team and coaching staff walk from the Skull Session in St. Johnâ&amp;#x20AC;&amp;#x2122;s Arena to the stadium prior to the game. Photo credit: Amanda Etchison

A man hoists a small child up onto his shoulders so that he can have a better view of the football teamâ&amp;#x20AC;&amp;#x2122;s arrival at Ohio Stadium. Photo credit: Amanda Etchison

A view of the Ohio State University Rotunda, located at the north end of Ohio Stadium. Photo credit: Amanda Etchison

A lone Michigan fan in a primarily OSU crowd looks on as the Ohio State and Michigan football teams walk into the stadium and prepare for the afternoon game. Photo credit: Amanda Etchison

A ticket scalper walks around outside of Ohio Stadium before the OSU vs. Michigan football game on Nov. 29. Photo credit: Amanda Etchison

A man and a young boy, dressed in OSU gear, share a slice of pizza outside of St. Johnâ&amp;#x20AC;&amp;#x2122;s Arena before the game. Photo credit: Amanda Etchison

A banner reading â&amp;#x20AC;&amp;#x153;Go Bucks! Michigan Sucks!â&amp;#x20AC;? hangs on the balcony of a house on Lane Ave. while a group of OSU fans await the start of the football game on the lawn. Photo credit: Amanda Etchison

A renovated OSU-themed school bus sits in front of a Lane Ave. apartment complex prior to the start of the OSU vs. Michigan game on Nov. 29. Photo credit: Amanda Etchison

A woman walks with an Ohio State banner through campus on her way to Ohio Stadium. Photo credit: Amanda Etchison

Artist Statement For my final open genre project, I decided to return to the first unit that we explored in this course—the photography unit. Having taken a digital photography course last year, this unit was by far the most comfortable and familiar to me. This time, however, I wanted to challenge myself to shoot using a DSLR camera instead of my digital point and shoot. I saw this final project as an opportunity to get my feet wet in the world of photojournalism. As I know I have several multimedia journalism classes coming up in the remainder of my undergraduate career at Ohio State, I thought using this time to become better acquainted with professional photography equipment would be beneficial in the long run. Up until this point, I have been using my Canon SX280HS camera, which is an advanced point and shoot camera. In this English 2269 class, I have used this camera for the first photography project and for our video project. While I have been pleased with the images I have captured using this camera, I have always had the desire to learn how to use a more advanced DSLR camera. I recently acquired my grandfather’s Nikon D80 camera, which I used to take the photos seen in this final project. It should be noted that the project I initially planned to present is much different than the one I ultimately produced. I originally wanted to try my hand at concert photography, as I already write primarily for Arts &amp; Entertainment publications and I thought knowing how to shoot my own photos for shows and concerts would be a marketable skill to have. Unforeseen issues regarding concert photo credentials arose throughout the weeks leading up the project, so I was forced to come up with a “Plan B.” I ultimately decided to document the Ohio State vs. Michigan pre-game experience. Although the images included in this final project were not of the subjects that I initially planned on photographing, I think the experience still served a valuable educational purpose. The photographs I captured are more photojournalistic in nature than the other projects I have pursued in the past. I think the differences in my approach to taking more documentary photographs can be best seen in the methodological and design choices that I made throughout my adventure into photojournalism. Methodologically speaking, this experience of taking photos felt different. While I was wandering the perimeter of Ohio Stadium, the way I went about looking for

subjects to photograph was much different than when I was taking photos for my first visual medium project. While photographing this project, I was inspired to take small moments from the larger scene and capture them forever in a single image. Personally, I take pleasure in honing in on intimate interactions that are often lost by the sheer multitude of distractions in an environment. Faced with a sea of red and gray-clad football fans, it was easy to be overwhelmed by the vibrancy of color standing out amongst a background of overcast skies. I knew that only taking photos of this crowd of people would not be as effective as highlighting the individuals that make up this mass gathering of humanity. I often entertain myself by making up stories about the lives of people that I pass on the street, and I decided to expand upon this idea of the mystery of individuals’ lives in this photojournalism project. This overarching idea did not only influence the methodological choices that I made while choosing the subjects to capture in these images—it also impacted the design choices I made while composing the image through the viewfinder, adjusting exposure settings, and determining exactly when to take the photo. Since I was motivated by a drive to capture just a few precious seconds of passing strangers’ lives, I tried to shoot most of the images that featured a specific individual or group of people with a shallow depth of field. This can be best seen in the photo of the young child on the man’s shoulders and in the photo of the family standing outside of St. John’s Arena. I think these two photos best represent my vision for this project. In reducing the chaotic background to blurred figures and shapes, it leaves the viewer with little choice but to ponder the life stories behind the subjects I chose to highlight in each photo. Prior to setting out to photograph on Saturday morning, my rhetorical purpose in this project was not as clear as in other projects. I wanted to go out and shoot with little preconceptions as to what I wanted to convey in these photos, since I wanted to have the experience of capturing images as they happened—instead of creating perfectly composed situations in order to convey a specific idea. I did know that my intended audience would be attendees at this gallery walk event, so it would most likely be people who have previously experienced the pre-game atmosphere of an OSU football game. This assumption further strengthened my resolve to go beyond basic crowd shots and search out a more personable approach to documenting this annual event.

As mentioned before, I think that sharing with my viewers a small portion of individualsâ&amp;#x20AC;&amp;#x2122; lives evokes a sense of pathosâ&amp;#x20AC;&amp;#x201D;a desire to indulge in piecing together the life story of a subject from just one stolen moment in time. In the case of the buckeye necklace photo or the OSU bus photo, I think that these photos highlight the minute details that are easily overlooked when oneâ&amp;#x20AC;&amp;#x2122;s senses are bombarded by a cacophony of sounds and an oversaturation of images. By focusing on these subjects, this project portrays an entirely different view of a beloved college tradition. Through this collection of images, I hope to personalize the experience of joining a crowd of hundreds of thousands of fans. I hope to provide my viewers with a few peaceful moments in the midst of a constantly bustling world, and encourage them to stop and look around for these intimate moments for themselves as they rejoin the rat race of everyday life.

"Photos from the OSU vs. Michigan Game"