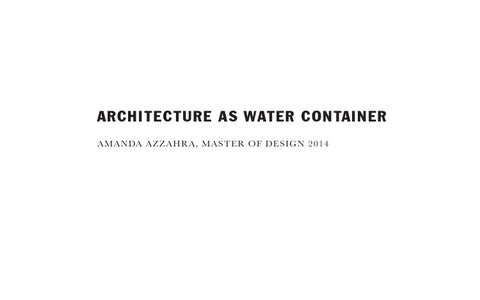 Thesis by Amanda Azzahra Published in 2014 ÂŠ 2014 Amanda Azzahra All right reserved. No part of this book may be reproduced in a retrieval system or transmitted, in any for or by any means, electronic, mechanical, photocopying, recording or otherwise, without the written permission of Amanda Azzahra. Designed by Amanda Azzahra Printed in the United States of America. amandaazzahra.com 401-572-4732

Special thanks to all my professors and thesis advisors, my family and my friends.

The ocean is dynamic and always in motion. By contrast, architecture is static and is moored to a given site. Architecture responds to water by adjusting to a certain form to protect the inhabitants inside. Water responds to its container by changing its shape to the containerâ&#x20AC;&#x2122;s form. Does architecture shape water or does water shape architecture? As global sea level rises, historic architecture built to respond to the form of ocean in the past is at risk of inundation. Newport Armory is one such historic waterfront building that is affected by the new borders of the sea. Periodically, the area is overtaken by tidal surge and the coastline is constantly changing due to twice daily high tides and low tides. In response to the site, I am interested in creating space and an experience that embodies the contradiction between protection and containment by manipulating built forms and the dynamic of water. By bringing the tidal inside the building, the dialogue between sea and land create flexible spaces that adjust with the sea-level fluctuations. This containment will create protection from future storm surge damage by raising public awareness about the issue. 02

Cities are built in close proximity with water, as it is essential to human life. It is often the first reason of founding a city as it is used for defense, trade, transportation, industry and recreation.1 These waterfront structures are at risk of global warming effects, rising sea level and more frequent storms. The earth has warmed by about 1.4 degrees Fahrenheit over the 150-year measurement and sea level has risen about 7 inches. Sea level is rising for two reasons: the warming of the ocean that is causing the ocean water to expand and the warming of ice that is adding volume to the ocean as it melts.2 This allows low lying lands to be flooded more frequently from coastal storms. The current 100-year flood water level could become the 30-year flood level after a 0.61 m (24 inches) rise and the 5-year flood level after a 1.22 m (48 inches) rise.3 A new way of adapting to the rising sea level is needed to protect waterfront infrastructures so that the infrastructures can extend their economic life span.

Newport, a seaside town in Rhode Island has a long history with water. Its waterfront has been a mixture of commercial, industrial and residential space since 1639.4 Today, Newport is a tourist destination with main focus in its historic building and maritime activities. With the rising sea level, Newportâ&#x20AC;&#x2122;s waterfront buildings are increasingly at risk. In some areas of the northeast United States, storm surges associated with future hurricanes could be 2 to 4 feet higher than present conditions. In Rhode Island, an estimated 2,700 housing units are at within the elevation of 3.3 feet above sea level. These units and business properties in low-lying areas will likely be inundated permanently or during more frequent extreme high tides.5 Newport Armory is located in Lower Thames Street and is one of the examples of Newportâ&#x20AC;&#x2122;s historic waterfront buildings that are at risk of rising sea level. During the Hurricane Irene in 2011, its tidal surge flooded the harbor level of this building.6

Aerial view of Newport Armory from harbor side (source: Marinas3) 07

Aerial view of Newport Armory from land side (source: Marinas4) 08

Tidal force and storm surge have capabilities to destroy infrastructures. To build solid walls to protect the infrastructures from the rising sea level is not a viable option. The storms will be more frequent in the future and they will temporary or permanently flood the area behind the protected walls. To respond to such problem, a new solution is needed. In Newport Armory, the back wall is removed to let water flows inside the harbor level during the storms and future sea level rise. The programs in this level are flexible as it may get flooded periodically. New channels are built to force daily tides to flow through and create a flexible space that adjusts with the sea-level fluctuations. These channels walls not only act to bring tides to flow through the building, but also as buffers for future storm surge.

Being located on the water, there is an opportunity in opening an oyster farm in Newport Armory. In proximity to the site, there are oyster farms around Narragansett Bay. Shellfishing and consumption of shellfish have been an important part of Rhode Islandâ&#x20AC;&#x2122;s history. Dated back to the Colonial period, oysters were harvested for their meats and shells as raw material for lime manufactures.8 Oysters rely on tides to bring them food and filter the salt water to collect food.9 Each day, an oyster is able to filter and clean up to 50 gallons of salt water, taking up algae and removing dirt and nitrogen pollution.10 The programs for the Newport Armory Oyster Farm are a nursery and farm on the harbor level and an oyster market and restaurant on the street level. The proposed oyster farm will take advantage of sea water that penetrates into the building as well as tidal force to circulate the water. Oyster seeds will be purchased from local hatcheries and the Newport Armory Oyster Farm will produce oysters for the restaurant and market and spats for oyster gardening, a volunteer program where waterfront property owners maintain an oyster nursery at their dock to restore Narragansett Bay and Block Island oyster reefs. 40

“... as the old oystermen knew, there’s no better place to grow oysters than in Rhode Island.”

Long section perspective. Not to scale

Harbor Level Plan. Not to scale 50

Street Level Plan. Not to scale 52

Exterior rendering of facade during storm 54

Rendering of the floating platforms during high tide. 57

Rendering of the floating platforms during low tide. 58

Rendering of entrance to the restaurant 60 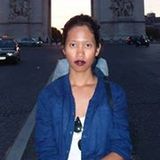