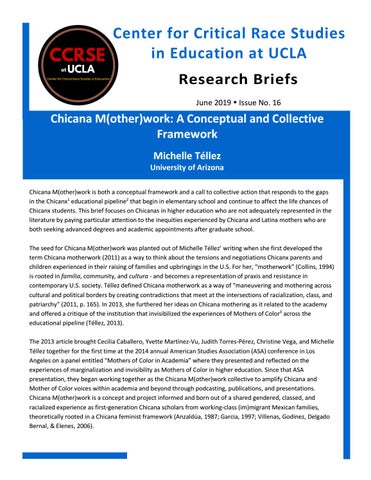 Chicana M(other)work is both a conceptual framework and a call to collective action that responds to the gaps in the Chicanx1 educational pipeline2 that begin in elementary school and continue to affect the life chances of Chicanx students. This brief focuses on Chicanas in higher education who are not adequately represented in the literature by paying particular attention to the inequities experienced by Chicana and Latina mothers who are both seeking advanced degrees and academic appointments after graduate school. The seed for Chicana M(other)work was planted out of Michelle Téllez’ writing when she first developed the term Chicana motherwork (2011) as a way to think about the tensions and negotiations Chicanx parents and children experienced in their raising of families and upbringings in the U.S. For her, “motherwork” (Collins, 1994) is rooted in familia, community, and cultura - and becomes a representation of praxis and resistance in contemporary U.S. society. Téllez defined Chicana motherwork as a way of “maneuvering and mothering across cultural and political borders by creating contradictions that meet at the intersections of racialization, class, and patriarchy” (2011, p. 165). In 2013, she furthered her ideas on Chicana mothering as it related to the academy and offered a critique of the institution that invisibilized the experiences of Mothers of Color3 across the educational pipeline (Téllez, 2013). The 2013 article brought Cecilia Caballero, Yvette Martínez-Vu, Judith Torres-Pérez, Christine Vega, and Michelle Téllez together for the first time at the 2014 annual American Studies Association (ASA) conference in Los Angeles on a panel entitled “Mothers of Color in Academia” where they presented and reflected on the experiences of marginalization and invisibility as Mothers of Color in higher education. Since that ASA presentation, they began working together as the Chicana M(other)work collective to amplify Chicana and Mother of Color voices within academia and beyond through podcasting, publications, and presentations. Chicana M(other)work is a concept and project informed and born out of a shared gendered, classed, and racialized experience as first-generation Chicana scholars from working-class (im)migrant Mexican families, theoretically rooted in a Chicana feminist framework (Anzaldúa, 1987; Garcia, 1997; Villenas, Godinez, Delgado Bernal, &amp; Elenes, 2006).

INSTITUTIONAL BARRIERS FOR WOMEN AND MOTHERS OF COLOR Research consistently shows that women faculty are less likely to be represented in tenure-track faculty positions across the nation and are instead overly represented in part-time and nontenure-track appointments (Finkelstein, Conley, &amp; Schuster, 2016; Harris &amp; González, 2013). For Women of Color, they are not only concentrated in the lower academic ranks, but are also overrepresented in what are perceived as “less prestigious” academic institutions, such as community colleges (Harris &amp; González, 2013). Data also shows that motherhood goes hand-in-hand with “secondtier” positions. Mothers are an astounding 132 percent more likely than fathers to end up in low-paid contingent positions as adjuncts, lecturers or visiting faculty (Mason, Wolfinger, &amp; Goulden, 2013). Moreover, the likelihood of Mothers of Color getting a tenure-track position, let alone obtain tenure, is minuscule (Castañeda &amp; Isgro, 2013). However, men with young children are 35 percent more likely than women with young children to not only secure tenure-track positions after completing their PhDs but also obtain tenure about 20 percent more frequently than academic 2

mothers (Mason, Wolfinger, &amp; Goulden, 2013). As women now compose the new faculty majority in the United States, the difficulties of advancing in PhD programs and into tenured careers are often framed as individual failings rather than fully recognizing the numerous institutional barriers that push Mothers of Color outside academia. Institutional barriers include, but are not limited to (1) poverty-level stipends for many graduate student parents, (2) exploitative stipends and wages for adjunct faculty, (3) unstable contingent employment, (4) little to no financial resources for childcare, (5) numerous unpaid service obligations within home departments and institutions, (6) conference presentations in nonchild friendly locations with expensive registration and travel fees, and (7) the expectation to attend professional networking events which often conflict with childcare and school hours (Caballero, Martinez-Vu, PerezTorres, Téllez, &amp; Vega, 2017). Moreover, a recent study shows that faculty family leave policies benefit fathers and disadvantage mothers (Wolfers, 2016). In addition, these issues are compounded by the various degrees of microaggressions that Mothers of Color receive from administrators, staff, faculty, colleagues, and peers, all of which can cause psychological harm

(Yosso, Smith, Ceja &amp; Solórzano, 2009). Taken together, these realities depict a dismal picture for Women of Color Mothers in academia. Combined with the invisible and feminized labor of mentoring Students of Color, providing undervalued service work for diversity initiatives, as well as maintaining family and community responsibilities and investments, Mothers of Color are often institutionally pushed out because they do not receive credit for their labor nor do they receive resources to adequately accommodate their mothering labor needs (Caballero et al., 2017).

CONCEPTUALIZING MOTHERWORK AND CHICANA M(OTHER)WORK The contributions of Chicana M(other)work, are theoretical and epistemological, offering an understanding of motherwork through the Chicana experience. Chicana M(other)work challenges the institutional barriers faced by Women of Color Mothers in academia by privileging an intersectional analysis to show why and how they are pushed out from academia altogether, exploited into unstable contingent positions, and expected to meet and exceed professional standards as graduate students and faculty with little to no support or resources (Caballero et al., 2017). lorem ipsum :: [Date] Chicana M(other)work builds on Patricia Hill Collins’ (1994)

Center for Critical Race Studies in Educa tion resources (Caballero et al., 2017). Chicana M(other)work builds on Patricia Hill Collins’ (1994) theorization of motherwork that centers race, class, gender, and other intersectional identities to challenge Western ideologies of mothers’ roles. Collins’ (1994) theoretical framework disrupts gender roles and defies the social structures and constructions of work and family as separate spheres for Black women and Women of Color; it acknowledges women’s reproductive labor as work on behalf of the family as a whole rather than benefiting men. Building on the term “motherwork,” Chicana M(other)work modifies it by embracing the term “other” through the use of parentheses as this calls attention to the layered care work from five words into one—Chicana, Mother, Other, Work, Motherwork. This framing demonstrates how Chicana M(other)work seeks to be inclusive to Women of Color both (trans and cis), nonbinary parents of color, other-mothers, and allies because mothering is not confined to biology or heteronormative family structures.

Chicana M(other)work draws attention to issues of heteropatriarchy, racism, and classism by highlighting the lived experiences of working-class Mothers of Color in their publications, including in their recently published (2019)anthology: The Chicana M(other)work Anthology: Porque Sin Madres No Hay Revolución.

anthology: The Chicana M(other)work Anthology: Porque Sin Madres No Hay Revolución (2019). Beyond the written word, they have developed a community driven podcast where they discuss a range of issues that are relevant to Mothers of Color – including issues of intergenerational violence and healing, activism, decolonized diets, among other topics. Their blog – where they publish the testimonios and research of Mothers of Color across the nation-- brings visibility to this work. In other words, part of the work is also about writing the experiences of Mothers of Color into existence. Chicana M(other)work is not a project of assimilating or diversifying academia; rather, the goal is to transform it by including motherhood (and children) within academic spaces and social justice work. Highlighting the multiple identities we negotiate (e.g., working class, Women of Color, queer, mothers, and scholars) can, over time, help produce institutional and interpersonal cultural change in academia. This work recognizes that policies will fall short without collective work to empower Mother-Scholars and help them/us change the culture of the academy.

CONCLUSION/FUTURE DIRECTIONS Ultimately, Chicana M(other)work is care work which includes the care one does in the home, in the classroom for students, in the community, in activism, and also

care one does in the home, in the classroom for students, in the community, in activism, and also importantly, self-care, healing, community formation and communal survival and accountability. The Chicana M(other)work project is about imagining possibilities, visibility, and offering a concept that administrators, teachers and colleagues can understand. Building on ethnic studies, critical race theory, and Chicana feminist epistemologies, the aim is to uplift and empower Mothers of Color within and outside of educational spaces by making these lives visible. It is important to call attention to the leaks in the Chicanx/Latinx educational pipelines stemming from the K-12 educational system as well as those for women and mothers as they climb the educational ladder. Since the founders of Chicana M(other)work are primarily situated in academic spaces, the initial work was centered on ending this cycle of institutional violence against Chicanas, Latinas, and Mothers of Color in academia. As the work expanded, however, they recognized that “Chicana M(other)work is a useful framework in many spaces and that by taking agency, making our labor visible, building community, and prioritizing community and self-care, we can contribute to institutional change and collective resistance for Mothers of Color” (Caballero, Martinez-Vu, lorem ipsum :: [Date]

use Chicanx to connote gender neutrality/inclusivity.

Following the lead of the Chicana M(other)work Collective, I capitalize the phrases: Women of Color and Mothers of Color to emphasize this group as a distinct population and to prioritize Mothers and Parents of Color who have been historically denied agency or ignored.

Michelle Téllez, co-founder of the Chicana M(other)work Collective and Assistant Professor in the Department of Mexican American Studies at the University of Arizona, is an interdisciplinary scholar trained in Community Studies, Sociology, Chicana/o Studies and Education. She writes about gendered migration, identity, mothering, and community formation and disruptions along the U.S./Mexico border. Center for Critical Race Studies in Education at UCLA 1032B Moore Hall Los Angeles, CA 90095 ccrse@gseis.ucla.edu

MISSION STATEMENT The Center for Critical Race Studies in Education supports interdisciplinary, collaborative, and policyoriented research on issues critical to Communities of Color.

Chicana M(other)work is both a conceptual framework and a call to collective action that responds to the gaps in the Chicanx educational pipeline that begin in elementary school and continue to affect the life chances of Chicanx students. This brief focuses on Chicanas in higher education who are not adequately represented in the literature by paying particular attention to the inequities experienced by Chicana and Latina mothers who are both seeking advanced degrees and academic appointments after graduate school.