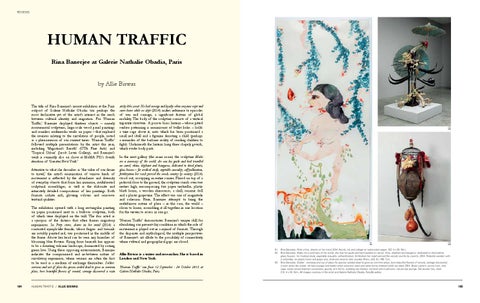 The title of Rina Banerjee’s recent exhibition at the Paris outpost of Galerie Nathalie Obadia was perhaps the most declarative yet of the artist’s interest in the mesh between cultural identity and migration. For ‘Human Traffic,’ Banerjee displayed thirteen objects – namely monumental sculptures, large-scale wood panel paintings and seamless multimedia works on paper – that explored the nuances relating to the circulation of people, noted as a phenomenon of our current times. ‘Human Traffic’ followed multiple presentations by the artist this year, including ‘Migration’s Breath’ (OTA Fine Arts) and ‘Tropical Urban’ (Jacob Lewis Gallery), and Banerjee’s work is currently also on show at MoMA PS1’s fourth iteration of ‘Greater New York.’ Attentive to what she describes as ‘the value of our desire to travel,’ the artist’s examination of various kinds of movement is reflected by the abundance and diversity of everyday objects that form her immense, multifaceted sculptural assemblages, as well as the elaborate and intricately detailed compositions of her paintings. Both formats radiate rich, glowing colours and sensuous textural qualities. The exhibition opened with a long rectangular painting on paper positioned next to a bulbous sculpture, both of which were displayed on the wall. The duo acted as a synopsis of the distress that often frames migratory experiences. In Petty crime, shame on her mind (2014) a contorted nymph-like female, whose finger- and toenails are notably painted red, was positioned in the middle of the frame. Above her head can be seen airy branches of blooming blue flowers. Rising from beneath her appears to be a daunting volcanic landscape, dominated by oozing green lava. Using these opposing environments, Banerjee indicates the compromised and in-between nature of circulatory experience, where women are often the first to be used as a medium of exchange themselves. Soldier: overseas and out of place his species seeded dead to grow as common place, bore beautiful flowers of wound, carnage discovered a resin

sticky like sweat. He had courage and loyalty when everyone wept and came home while we slept (2014) makes reference to episodes of war and carnage, a significant feature of global mobility. The body of the sculpture consists of a vertical tripartite structure. A porous brass lantern – whose pitted surface patterning is reminiscent of bullet holes – holds a wire cage above it, onto which has been positioned a small red skull and a figurine denoting a child (perhaps a reminder of the barbaric reality of sending children to fight). Underneath the lantern hang three shapely gourds, which evoke body parts.

In the next gallery (the main room) the sculpture Make me a summary of the world, she was his guide and had travelled on camel, rhino, elephant and kangaroo, dedicated to dried plants, glass houses – for medical study, vegetable sexuality, self-pollination, fertilization her reach pierced the woods country by country (2014) stood out, occupying an entire corner. Placed on top of a pedestal close to the ground, the sculpture stands over two metres high, encompassing two paper umbrellas, plastic black horns, a wooden rhinoceros, a shell, ceramic doll and a plastic grapevine. The effect was one of magnitude and cohesion. Here, Banerjee attempts to bring the multifarious nature of place – in this case, the world – closer to home, assembling it all together in one location for the viewer to access in one go. ‘Human Traffic’ demonstrates Banerjee’s unique skill for elucidating our present-day condition in which the role of movement is played out in a myriad of formats. Through the disparate and mythological, the multiple perspectives of Banerjee’s art allude to the possibility of connectivity where cultural and geographical gaps are closed. Allie Biswas is a writer and researcher. She is based in London and New York. 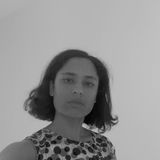