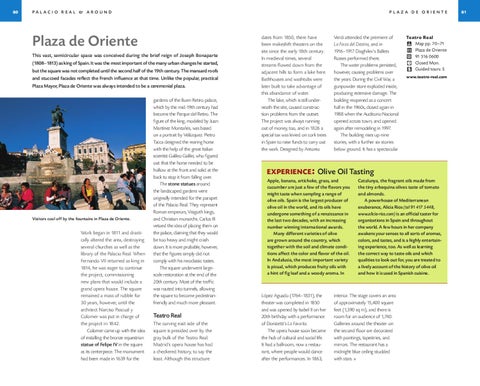 Plaza de Oriente This vast, semicircular space was conceived during the brief reign of Joseph Bonaparte (1808–1813) as king of Spain. It was the most important of the many urban changes he started, but the square was not completed until the second half of the 19th century. The mansard roofs and stuccoed facades reflect the French influence at that time. Unlike the popular, practical Plaza Mayor, Plaza de Oriente was always intended to be a ceremonial plaza.

Visitors cool off by the fountains in Plaza de Oriente.

Work began in 1811 and drastically altered the area, destroying several churches as well as the library of the Palacio Real. When Fernando VII returned as king in 1814, he was eager to continue the project, commissioning new plans that would include a grand opera house. The square remained a mass of rubble for 30 years, however, until the architect Narciso Pascual y Colomer was put in charge of the project in 1842. Colomer came up with the idea of installing the bronze equestrian statue of Felipe IV in the square as its centerpiece. The monument had been made in 1639 for the

gardens of the Buen Retiro palace, which by the mid-19th century had become the Parque del Retiro. The figure of the king, modeled by Juan Martínez Montañés, was based on a portrait by Velázquez. Pietro Tacca designed the rearing horse with the help of the great Italian scientist Galileo Galilei, who figured out that the horse needed to be hollow at the front and solid at the back to stop it from falling over. The stone statues around the landscaped gardens were originally intended for the parapet of the Palacio Real. They represent Roman emperors, Visigoth kings, and Christian monarchs. Carlos III vetoed the idea of placing them on the palace, claiming that they would be too heavy and might crash down. It is more probable, however, that the figures simply did not comply with his neoclassic tastes. The square underwent largescale restoration at the end of the 20th century. Most of the traffic was routed into tunnels, allowing the square to become pedestrianfriendly and much more pleasant.

Teatro Real The curving east side of the square is presided over by the gray bulk of the Teatro Real. Madrid’s opera house has had a checkered history, to say the least. Although this structure

dates from 1850, there have been makeshift theaters on the site since the early 18th century. In medieval times, several streams flowed down from the adjacent hills to form a lake here. Bathhouses and washtubs were later built to take advantage of this abundance of water. The lake, which is still underneath the site, caused construction problems from the outset. The project was always running out of money, too, and in 1826 a special tax was levied on cork trees in Spain to raise funds to carry out the work. Designed by Antonio

Verdi attended the premiere of La Forza del Destino, and in 1916–1917 Diaghilev’s Ballets Russes performed there. The water problems persisted, however, causing problems over the years. During the Civil War, a gunpowder store exploded inside, producing extensive damage. The building reopened as a concert hall in the 1960s, closed again in 1988 when the Auditorio Nacional opened across town, and opened again after remodeling in 1997. The building rises up nine stories, with a further six stories below ground. It has a spectacular

experience: Olive Oil Tasting Apple, banana, artichoke, grass, and cucumber are just a few of the flavors you might taste when sampling a range of olive oils. Spain is the largest producer of olive oil in the world, and its oils have undergone something of a renaissance in the last two decades, with an increasing number winning international awards. Many different varieties of olive are grown around the country, which together with the soil and climate conditions affect the color and flavor of the oil. In Andalusia, the most important variety is picual, which produces fruity oils with a hint of fig leaf and a woody aroma. In

López Aguado (1764–1831), the theater was completed in 1850 and was opened by Isabel II on her 20th birthday with a performance of Donizetti’s La Favorita. The opera house soon became the hub of cultural and social life. It had a ballroom, now a restaurant, where people would dance after the performances. In 1863,

Catalunya, the fragrant oils made from the tiny arbequina olives taste of tomato and almonds. A powerhouse of Mediterranean exuberance, Alicia Ríos (tel 91 417 5448, www.alicia-rios.com) is an official taster for organizations in Spain and throughout the world. A few hours in her company awakens your senses to all sorts of aromas, colors, and tastes, and is a highly entertaining experience, too. As well as learning the correct way to taste oils and which qualities to look out for, you are treated to a lively account of the history of olive oil and how it is used in Spanish cuisine.

interior. The stage covers an area of approximately 15,400 square feet (1,390 sq m), and there is room for an audience of 1,740. Galleries around the theater on the second floor are decorated with paintings, tapestries, and mirrors. The restaurant has a midnight blue ceiling studded with stars. n 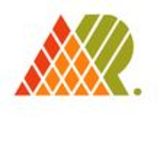