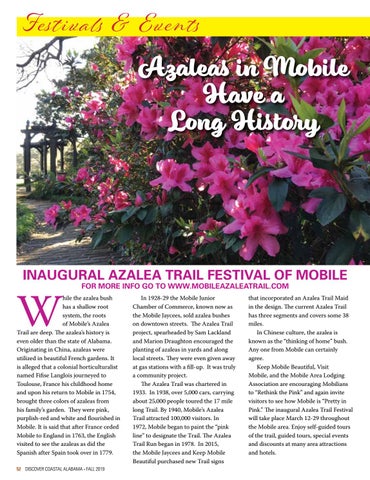 Azaleas in Mobile Have a Long History

FOR MORE INFO GO TO WWW.MOBILEAZALEATRAIL.COM

hile the azalea bush has a shallow root system, the roots of Mobile’s Azalea Trail are deep. The azalea’s history is even older than the state of Alabama. Originating in China, azaleas were utilized in beautiful French gardens. It is alleged that a colonial horticulturalist named Fifise Langlois journeyed to Toulouse, France his childhood home and upon his return to Mobile in 1754, brought three colors of azaleas from his family’s garden. They were pink, purplish-red and white and flourished in Mobile. It is said that after France ceded Mobile to England in 1763, the English visited to see the azaleas as did the Spanish after Spain took over in 1779.

In 1928-29 the Mobile Junior Chamber of Commerce, known now as the Mobile Jaycees, sold azalea bushes on downtown streets. The Azalea Trail project, spearheaded by Sam Lackland and Marion Draughton encouraged the planting of azaleas in yards and along local streets. They were even given away at gas stations with a fill-up. It was truly a community project. The Azalea Trail was chartered in 1933. In 1938, over 5,000 cars, carrying about 25,000 people toured the 17 mile long Trail. By 1940, Mobile’s Azalea Trail attracted 100,000 visitors. In 1972, Mobile began to paint the “pink line” to designate the Trail. The Azalea Trail Run began in 1978. In 2015, the Mobile Jaycees and Keep Mobile Beautiful purchased new Trail signs

that incorporated an Azalea Trail Maid in the design. The current Azalea Trail has three segments and covers some 38 miles. In Chinese culture, the azalea is known as the “thinking of home” bush. Any one from Mobile can certainly agree. Keep Mobile Beautiful, Visit Mobile, and the Mobile Area Lodging Association are encouraging Mobilians to “Rethink the Pink” and again invite visitors to see how Mobile is “Pretty in Pink.” The inaugural Azalea Trail Festival will take place March 12-29 throughout the Mobile area. Enjoy self-guided tours of the trail, guided tours, special events and discounts at many area attractions and hotels. COASTAL ALABAMA IS A RARE JEWEL. IN THIS ISSUE, WE HIGHLIGHT THE COMMUNITY’S HISTORY INCLUDING MOBILE’S WORKING WATERFRONT. Our coastal tour...

COASTAL ALABAMA IS A RARE JEWEL. IN THIS ISSUE, WE HIGHLIGHT THE COMMUNITY’S HISTORY INCLUDING MOBILE’S WORKING WATERFRONT. Our coastal tour...